Did You Know? Karol Krauser was Fleischer's Superman Model 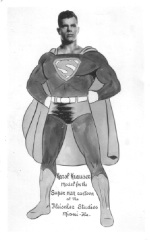 It has been well documented that when Paramount Pictures approached Fleischer Studios about producing a series of animated shorts dedicated to Superman they were less than enthusiastic about taking on the project, quoting a figure of $100,000 per episode (four times the going rate of the time), thinking the price would be too high for Paramount to accept and that would be the end of that. However Paramount said, "Okay, go ahead" and the rest (as they say) is history.

While the Fleischer Superman would obviously be based on the character drawn by Joe Shuster as seen in "Action Comics" and "Superman" comic books, they employed a technique known as "Rotoscoping" in which real-life figures were traced in ink, frame by frame, making the animated figures more believable.

Whether he was used in this fashion or not is unknown, but professional wrestler Karol Krauser was used as the male model by the Fleischers to aid in their portrayal of Superman for the animated shorts.

Born August 24, 1912 in Hollyoke, MA, Karol is best known as one of the Kalmikoff Brothers, Mad Russians, in the wrestling world of the 1950s and 1960s. In 1939 or 1940 Krauser modeled for the Fleischer Studios in Florida for the Superman animated shorts.

Interestingly, Stan Laurel (from Laurel and Hardy) was best man at his Krauser's wedding.

Many thanks to Karol's grandson, also named Karol Krauser, for the photos.