A Tribute to Christopher Reeve

I'm a dreamer, a writer, a poet, and one of the reasons I've become so is the influence of Christopher Reeve.

My earliest memories are of getting a beaten pirated VCR tape of "Superman: The Movie", putting it in the slot (sometimes upside down, my young hands were not dexterous), and kneeling down on the floor.

I would wait until the music built, that John Williams music, and then stand, making noises, when the space ship would break through the ceiling. I'd run around the room as Clark grew, with a towel on my neck, and then I'd talk whenever Clark talked, and this is where Reeve began telling me, teaching me the difference between right and wrong, good and bad, and why one never, ever should tell a lie, under any circumstances, because it's just not Superman-y.

I can't lie. I'm devastated by his loss.

I was so moved, so utterly trusting of his portrayal, that I never realized that outside of this embodiment of the true utter spirit of America, there was another man. I was astonished when I found out that he had been paralyzed, but I knew at the exact same second that it would not slow him down, and it didn't. I didn't want to know that Superman couldn't walk any more. Reeve came forward soon after and taught me that what makes a man more than he seems has nothing to do with all of that power, and more to do with the spirit within.

Reeve wanted to break from the role at times, as most who portray Superman do, but people would look to him as the icon, and Reeve did not ignore their pleas for the man who can do no wrong. He took other parts, but he still held Superman near and dear to his heart, and remained the best human being that he could be. Even post-paralysis, his leaps forward in spinal chord study were phenomenal. The public attention he brought to what was formerly quite a private problem is not to be diminished.

It has been written in harsh criticism that I have read that Christopher Reeve did not deserve praise. That he was one paralyzed man among many, one actor among many, and that anyone given his opportunities could have done the same things.

Believe what you will, I find this patently false.

He may have, by virtue of wealth, been afforded perhaps more care, but this is not something to begrudge the man for. What you question when you call to carpet the intent and the benefit of wealth is how a person applies it. When given a gift do you use it for good, or for evil? The same question asked of Superman. The question we must all ask ourselves, from the poorest pauper to the richest Gates.

Reeve could have rescinded his public role and spent his days trying to find a cure on the lonesome with the best doctors that money could buy. Instead, he stepped forward and made his struggle public, doing interviews, taking roles despite being physically taxed to his limits, all in an effort to bring his debilitation to the forefront as something to be worked through, something for us to understand. Not a social stigma, but rather, a relational for the struggle we all have against our inner demons and adversity. A pinnacle of what it is to be tested as a human being.

Where as a child I saw that kids with disabilities were called cripples and teased, regarded as nothing of worth, and now, through the years, I have seen a slow and steady change to a modality of understanding, so people like the quadriplegics I've worked with and my family members in a wheelchair are regarded in the same breath of accomplishment and vitality to society as anyone else. It is not a lie to say that a large part of the modern understanding of disability comes from the actions of one man:

He meant so much.

He's one of those people who, when he told us he would walk again, I believed that he would.

You may believe in the afterlife or not, but it would take only the most callused of mind to think that Reeve is not one of the more deserving souls of our time for a happy reward at the end of the proverbial clearing.

I myself am a bit too torn with grief right now to look at his death objectively, but I will simply say that it comes as a stunning loss, just a stunning loss.

Many attain fame. Many earn or are given more money than they know what to do with. And a lot of actors have pet projects that they throw themselves into. But who can say that they have done more for a cause than Christopher Reeve did for paralysis? And who can say that they did more for the role of Superman than Christopher Reeve? These are the realities in which we judge the man, a man, any man, as fans, as people who do not know him personally, and in this, he is the best possible person that I could have wished for, in the public eye or outside of it.

I never got to shake his hand, and I know that, world willing, had enough time passed, Reeve would have moved that hand enough to do so. 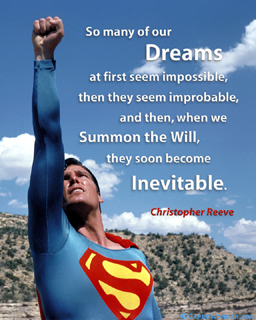 I encourage you all to grieve. It's the normal thing to do. Someone we care about, someone who has molded a part of our lives and given it a meaning, has passed. Talk. Remember the man. Live his dream for him, as he no longer can on this Earth.

Do his memory well.

Do not tell a lie.

Do not give up when life strikes you down.

Do not let the bad guys win.

Do not be weighted down by the strength of adversity.

And one day, we might all live in the Metropolis of our dreams that he set before us with his honest smile, his fearless faith, and his strength of character.

The man may be dead, but the super lives on.