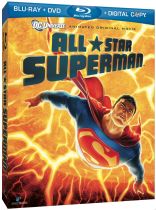 Story - 4 out of 5: I went into this film having been familiar with the original Grant Morrison story that I'd read when it came out a few years ago. By no means did I remember exactly what had happened in every section of the 12 part saga, nor in the story as a whole. I had fond memories of the story and I remember thinking it was really good at the time. "All-Star Superman," the tenth entry in the Warner Brothers Animation film series makes me feel the same way. The film is epic on a scale not usually seen in Superman media, in the same way that the "All-Star" mini-series was when it was released. It's most definitely a Silver Age kind of Superman, in that he's building stars in his Fortress, lifting 500 THOUSAND ton keys to unlock the door and memorizing the entirety of Lois' DNA mapping. These types of powers Superman has displayed at one point or another during his 70 plus year career, though not usually all at once and not in the modern era.

The greatest thing about this story though is the emotional arc that its characters go through during the course of it. Superman, Lois and even Lex Luthor have character arcs not often seen in animation and to have it all be accomplished in less than 75 minutes is no small feat. Ten films ago, when this series began with "Superman/Doomsday", I wondered how they would contain everything that goes on in the original material in such a short adapted version. I feel up to this point they've done a pretty good job and with this one, I almost feel there's too much to take in. At some points there's so much going on and happening to the characters that you can't believe it's not well over its allotted time.

Unfortunately though, I think having so much contained in such a short time might also be the film's biggest weakness. I scored this a 4 of 5, though if I'd not read the source material I find myself wondering if I might not have scored it lower. A 3 certainly isn't out of the question considering I did read the original series and still I found some of the plot hard to follow, understand or sometimes buy into. Part of the problem stems from all the outrageous things they have happening to Superman. In the books, I got the impression Morrison was trying to include many of Superman's most memorable foes, almost as if he were doing a retrospective of Superman's life, even though the story takes place in a relatively short time. Here though, especially for new viewers or people unfamiliar with, for instance, the Parasite or Atlas, it almost seems too over the top. The grand scale of it all is definitely impressive, and some of the characters, like Atlas, are very humorous. But if you're scratching your head while you watch because you don't know who the characters are or even why they're in the story, it could be a hindrance.

I love the interactions between Luthor and Clark Kent. In the story, much like the Morrison source material, it seems as if we're back to the Silver Age concept that Superman is the man and that Clark is sort of a joke, or mockery of regular people. I've personally never appreciated that version of Clark Kent as much as the more modern take where he's the man first and Superman is the creation. However, the story is what it is and as such, I enjoyed it for that. There are other Silver-Agey concepts, such as Superman being somewhat a scientific genius himself and erecting marvels in his Fortress while Lois watches in awe. Again, for new people, or worse yet, people who think Superman is already difficult to take because he can do anything he wants, this film will be very hard to swallow because they take that idea and stretch it absolutely as far as it can go.

However, for people who are already fans and just want to absorb any Superman story they can with great characters and great arcs for those characters, "All-Star Superman" won't disappoint. It's my opinion that it may have difficulty finding a fresh audience, but those who are already enjoying this ten film series are probably a given to buy it in some from or another. The title is a bit of a turn-off for people who don't know anything about the mini-series because it doesn't really mean anything relative to the story you're watching. In the books it was like a brand. Several of the DC heroes had their own "All-Star" line so readers knew what they were getting when they bought it. In movie format though, the title doesn't mean much and might even sound silly. On the flip side of that, the fans who already love the story and understand the title will be more likely to buy because it directly references something they already loved.

Lois and Superman, as readers of the series already know, go on quite an adventure together during the course of the story. And while, in the books, Lois' adventure was a much more minor part, the movie definitely places heavy emphasis on that part of the story, as well as the continuing relationship after and how those two characters interact and grow with each other during the course of it. There are bits of neat-ness for the peripheral characters as well: Perry White, Jimmy Olsen and even Ma Kent. I've already mentioned how fun Luthor is to watch and his best moments are often shared with Superman in his Clark Kent guise. The ultimate climax of the piece is a little difficult to understand if you don't have any background in things like sun-eaters or Solaris, but it is the emotional heft of the story that really keeps the film going. Dwayne McDuffie said we get to see how people are changed for the better simply by coming in contact with Superman and nowhere is that more prevalent than in "All-Star Superman."

Animation - 4 out of 5: Crisp, clean and pretty lifelike in an animation kind of way if you know what I mean. The look of the characters was clearly informed by Frank Quitely's artwork in the original mini-series, but of course with moving, talking characters there will always be some differences. For an adaptation for film, I think all the choices made worked really well and people will be pleased when gazing upon their televisions. There do however, seem to be a few problems with certain scenes where characters are simply walking. At times they seem very stiff and unnatural, hence the docked point. I also noticed a few spots where characters seemed to be missing toes or the bottom of their foot looked more like a shoe than a bare foot. Overall though, very pretty to look at. The most visually impressive scene may just be the prison from beginning to end.

Voice Acting - 5 out of 5: I was personally surprised by some of the voice-work in this film. James Denton as Superman? A fantastic rendition that I never would have expected. Denton brings an emotional connection to the role that lets us know how thoughtful about the human condition Superman is and as Clark he's still clearly trying to figure things out as he moves through his life and it just works for our mild mannered reporter. Christina Hendricks as Lois Lane was another shocker. At first I thought her higher pitched, cute voice might not work for the character but Hendricks switched it up. She managed to bring her octave down and sound like the tough, no nonsense investigative reporter and woman we all know to be an equal for Superman. Anthony Lapaglia's Luthor is all business. His is the best dialogue in the piece and Lapaglia delivers it with such power and confidence that you immediately know you're dealing with Lex Luthor. These three are clearly the main highlights but I didn't notice one character or spot where the acting was off or where a voice didn't fit a character. Listen for John Di Maggio (Aquaman from Batman: The Brave and the Bold) as a hugely comical character - you'll be glad you did.

Music - 5 out of 5: The orchestration is just spot on from top to bottom. There are moments when Superman is flying or when he's doing something amazing where the music simply soars. There are times when a quieter, more gentle score is called for and the music is perfect on these occasions too. The main theme is certainly appropriate for a Superman feature and I don't think anyone will have a problem hearing the heroic in those all important moments when Superman is saving the day. The score, by Christopher Drake, coupled with what's happening on screen, work perfectly in tandem to bring just the right mix of emotion the story called for and there should be points where viewers will get choked up. I know I did.

All-Star Superman will be distributed February 22, 2011 by Warner Home Video as a Blu-Ray Combo Pack and 2-Disc Special Edition DVD, as well as single disc DVD. The film will also be available On Demand and for Download.