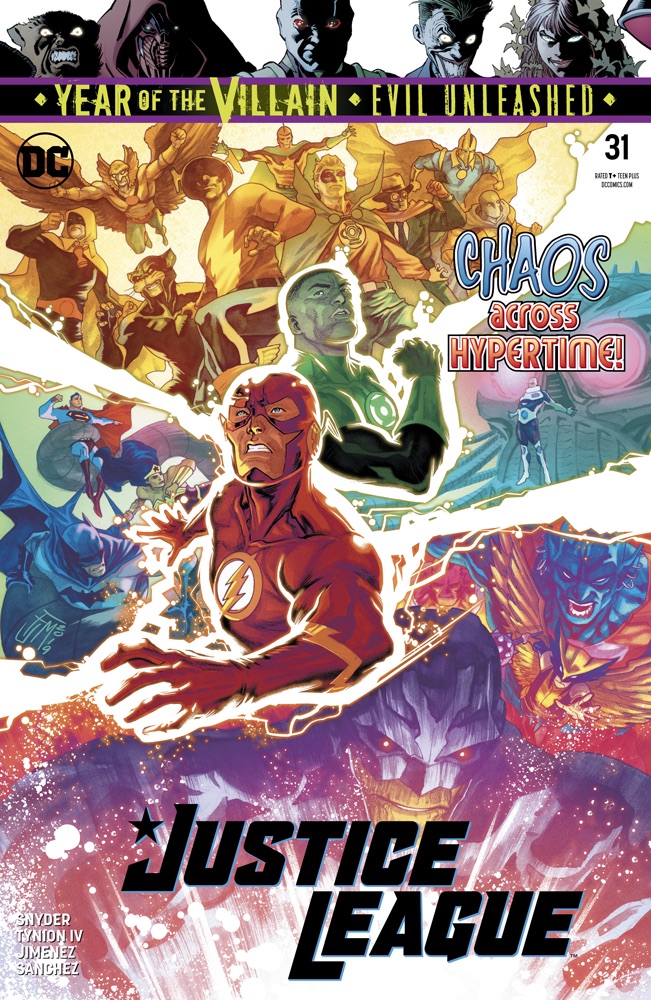 The Justice Society aid The Flash and Green Lantern find the Justice totality piece they need. The only problem is that it’s being stored at the Pearl Harbor Naval Base on December 7, 1941. Meanwhile, Shayne, the son of Hawkgirl and Martian Manhunter, can help the Justice Leaguers in the present find Apex Lex thanks to the Martian DNA in Luthor. In the future, Wonder Woman, Kamandi, Batman and Superman discover Brainiac is bottling various possible futures throughout Hyper time. One of those has the Totality fragment they need to give their Starman. To complicate things even more, Superman’s gr encounter the Justice Legion A. They’ll have their work cut out for them if they are to win against the Legion of Doom.

Shayne has found Luthor. However, the Justice League may be too late to stop him. He and Perpetua are headed straight for the Godhead in hopes of recruiting the Anti-Monitor, whose new ally is none other than Arthur Curry. Find out what part Aquaman plays in the next phase of Justice/Doom War, Superfans. Superman and his comrades are really in for a multiverse shattering battle that could literally end all that exists.

Story – 4: I’m sorry to say this issue wasn’t as good as #30. It was an entertaining read, and it was as fun as usual. However, there could have been just a little more focus on Shayne and Hawkgirl’s relationship. The character moments balanced with the story and its pacing are normally what make this series great. The cutting down of such moments in the previous issue helped the book flow well. Here, the omission makes this chapter feel choppy. Still, I’d recommend this comic to anyone who hasn’t read a Justice League in their life. It’s one of the best team books on the market today.

Art – 5: Page after page of this is epic in the hands of Jorge Jimenez. He sincerely should be drawing every issue of Scott Snyder’s run. They really work very well together.

Cover Art – 3: The logo problem from last time is running rampant this time in a cover image that seems to be the most chaotic one of the series so far.

Variant Cover Art – 3: This looks like it was done with crayons, which really wouldn’t be bad if some characters weren’t overly saturated with color. Plus, it looks drawn in a hurry to meet the deadline.