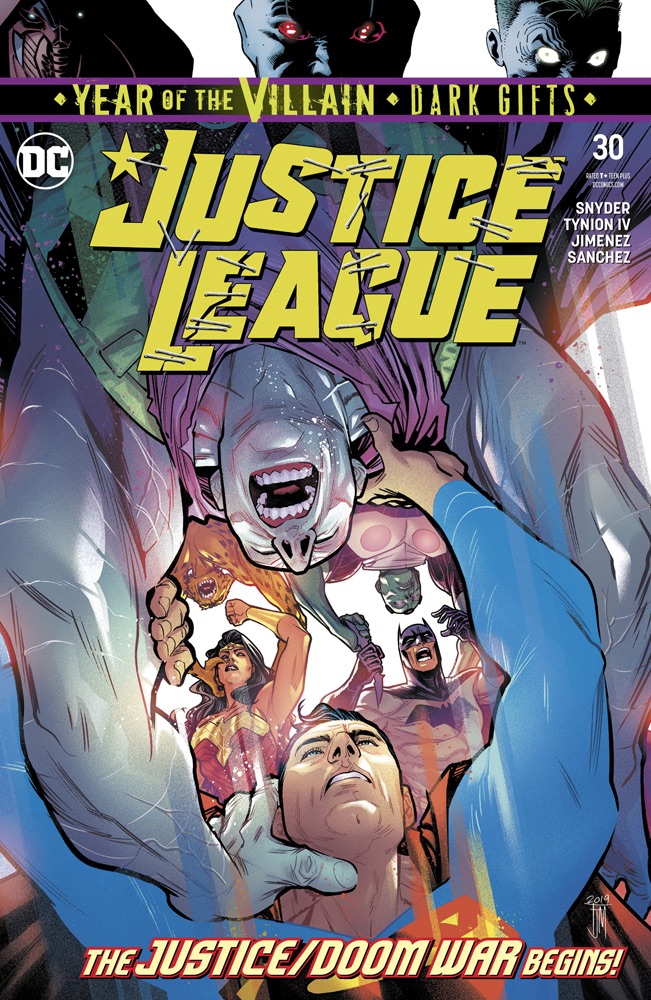 In three days time, the Justice League will die battling the Legion of Doom. Starman, however has a plan. Just as the seven positive energies of the multiverse have darker counterparts, the fragments of the Totality Lex Luthor has has lighter ones that can form a Justice Totality when combine with Starman’s staff Starman can use it to combat Luthor’s one for Doom. While the World Forger and the Monitor attempt to convince the Anti-Monitor to heel them create something to contain their mother Perpetua, Starman and various leaguers must protect them, In the meantime, Green Lantern and Flash must travel to the past, and Wonder Woman, Batman and Superman go to the future. Their objective is to find the pieces needed to defeat Luthor. If they don’t find what they need, the multiverse will plunge into utter obscurity.

A mysterious foe has attacked the Hall of Justice, preventing Starman from contacting the leaguers who have traveled through time. The heroes in the pas and the future have discovered the word has been/will be ravaged by a war they were to late to prevent, for it began two weeks ago. Kamandi, the Last Boy on
Earth and the Justice Society have been fighting ever since. There may be no hope to stop the Legion of Doom, Superfans, if the Justice League doesn’t figure out how to stop them before Perpetua can recreate the multiverse to suit her dark purposes.

Story – 5: This one was a pretty fast read. It didn’t have many of the character moments of other issues, but those may have gotten in the way considering all that’s going on in this story arc so far Sure, the moment between Superman and Hawkgirl works well in this chapter, but it’s brief because Scott Snyder And James Tynion IV seem to be more focused on setting aside banter and other such things in order to shine the spotlight on what goes on in the story. It’s an edge of your seat serial that will leave you wanting more when you get to the last page.

Art – 5: Jorge Jimenez and Scott Snyder are the dream team for this series. Sure, other artists have done stupendous work on the book, but Jimenez gives it the epic, larger than life feeling it deserves. His art style may not be for everyone. Yet. I find it complements Snyder’s storytelling very well.

Cover Art – 3: The angles are off, and the Year Of The Villain logo is too disruptive this time around. The art itself is good. It’s just not as good as other covers in the series.

Variant Cover Art – 5: Is DC trying to sell posters or comics? This variant feels like it’s meant for the former than the latter. It’s a well drawn cover in spite of that, however.

hi – great review as always. been a big fan of supermanhomepage’s mild manner reviews since 2003! just wanted to let you know that some of your latest reviews (justice league 30 & 31, batman/superman 1, etc.) are not listed on the mild mannered review 2019 list page nor the “latest comic books review” page – and they are rather hard to find on the website! it was a bit unusual not to see an updated comic book review from you guys (usually you guys are way ahead of the game) so i checked your twitter account, and low and… Read more »