DC Comics has released their October 2018 solicitations, and we’ve highlighted for you all the Superman-related comics and products listed.

SUPERMAN BLANK COMIC #1
Celebrate “24-Hour Comics Day” with the SUPERMAN BLANK COMIC! You can write and draw your very own adventure of the Man of Steel in this 16-page comic, which features uncoated 80-pound paper (the same stock used on DC’s blank variant covers) that’s ideal for drawing on!
ON SALE 10.03.18
$2.99 US | 16 PAGES

HEROES IN CRISIS #2
written by TOM KING
art and cover by CLAY MANN
variant cover by RYAN SOOK
Suspected of murder, [REDACTED] and [REDACTED] find themselves on the run from the super-hospital called Sanctuary -with each thinking the other one is the real killer! It’s up to Batman to solve this heinous crime, but suspicion falls on him when Superman and Wonder Woman ponder just how much Sanctuary’s A.I. is telling them. Meanwhile, [REDACTED] tries to make a shady deal to hide from the Trinity, while [REDACTED] searches out an old friend to help him out of this mess-and only gets deeper in trouble.
ON SALE 10.24.18
$3.99 US | 32 PAGES
FC | 2 of 7 | RATED T+
This issue will ship with two covers.
Please see the order form for details.

JUSTICE LEAGUE #9
written by SCOTT SNYDER
art cover by JORGE JIMENEZ
variant cover by JIM LEE and SCOTT WILLIAMS
1:100 variant cover by JIM LEE
THE ROAD TO “DROWNED EARTH”! Superman and Batman can’t agree on how to put back the moon-you know, the one that went missing in issue #1. On the other hand, Wonder Woman and Aquaman have faith in each other, working together on a new addition to the Hall of Justice. Martian Manhunter takes Hawkgirl under his wing to test out the limits of her recently broken wing, and Flash and Green Lantern get up to some hijinks in the Hall’s cafeteria. Can you say super food fight?!
ON SALE 10.03.18
$3.99 US | 32 PAGES
FC | RATED T+
This issue will ship with three covers.
Please see the order form for details.

JUSTICE LEAGUE #10
written by SCOTT SNYDER
art and and enhanced foil cover by FRANCIS MANAPUL
variant cover by JAE LEE
THE ROAD TO “DROWNED EARTH”! When Wonder Woman learns that Cheetah gained new powers and killed the Greek sea god, Poseidon, that sets Aquaman off on a search for answers, bringing him into conflict with an entity known as the Flood, a herald for long-dead ocean gods with an ancient grudge against Poseidon, Atlantis and, well, everyone else on Earth. Who are those guys? Some very big fish-and you know what big fish do? Eat smaller fish like Aquaman and his Justice League buddies!
ON SALE 10.17.18
$3.99 US | 32 PAGES
FC | RATED T+
This issue will ship with two covers.
Please see the order form for details.

SUPERMAN/TOP CAT SPECIAL #1
written by DAN DiDIO
art and cover by SHANE DAVIS
backup story written by J.M. DeMATTEIS
backup story art by TOM MANDRAKE
variant cover by EMANUELA LUPACCHINO
It’s Superman versus super food with Top Cat caught in the middle. While searching for his missing friend Bennie, TC uncovers a dietary danger that threatens the healthier portions of mankind, and it’s up to the Man of Steel to stop the probiotic menace of Kalien! In the salad bar, no one can hear you scream. Plus, part four of a Secret Squirrel backup story written by J.M. DeMatteis.
ONE-SHOT | ON SALE 10.31.18
$4.99 US | 48 PAGES
FC | RATED T
This issue will ship with two covers.
Please see the order form for details.

ACTION COMICS #1004
written by BRIAN MICHAEL BENDIS
art by RYAN SOOK
enhanced foil cover by STEVE RUDE
variant cover by FRANCIS MANAPUL
Superman confronts Lois Lane and wants answers: Where is Jon Kent? What happened during Lois’ trip into space with Jor-El? Why didn’t she contact the Man of Steel when she returned? And most importantly, does she still love him? Or is the world-famous reporter looking to let Clark Kent down easy? Lois and Clark’s relationship gets redefined in this issue illustrated by acclaimed artist Ryan Sook!
ON SALE 10.24.18
$3.99 US | 32 PAGES
FC | RATED T
This issue will ship with two covers.
Please see the order form for details.
Includes a code for a free digital download of this issue.

ADVENTURES OF THE SUPER SONS #3
written by PETER J. TOMASI
art by CARLO BARBERI and ART THIBERT
cover by DAN MORA
The Super Sons find themselves tumbling through space and time without so much as a GPS to guide them! Having battled the intergalactic group of teen hoodlums known as the Gang, Superboy and Robin barely escape. However, they do end up having a shootout with gunslingers on a Western-like world before engaging in a swordfight to save a princess on a medieval-like planet. The Sons need to find their way back to Earth before the Gang does a planetary smash-and-grab with the whole planet!
ON SALE 10.03.18
$3.99 US | 3 of 12 | 32 PAGES
FC | RATED T

INJUSTICE 2 #35
written by TOM TAYLOR
art by DANIEL SAMPERE, BRUNO REDONDO and JUAN ALBARRAN
cover by DANIEL SAMPERE
Gorilla Grodd forms a deadly alliance and leads an uprising to take out King Solovar and conquer Gorilla City. Against the backdrop of all hell breaking loose, the Suicide Squad decides it would be a good idea for teammates Killer Croc and Orca to get married! Love and death reign side by side as the series draws toward its conclusion.
ON SALE 10.03.18
$2.99 US | 32 PAGES
FC | RATED T+
DIGITAL FIRST

INJUSTICE 2 #36
written by TOM TAYLOR
art by DANIEL SAMPERE, BRUNO REDONDO and JUAN ALBARRAN
cover by BRUNO REDONDO
Events align leading up to the storyline in the Injustice 2 video game. Gorilla Grodd takes center stage as Earth’s deadliest menace, while secretly in the service of the intergalactic menace known as Brainiac.Which heroes will survive to face him? And what role might the imprisoned Superman play as events come to a head?
ON SALE 10.17.18
$2.99 US | 32 PAGES
FC | RATED T+
DIGITAL FIRST
FINAL ISSUE

INJUSTICE VS. MASTERS OF THE UNIVERSE #4
written by TIM SEELEY
art and cover by FREDDIE E. WILLIAMS II
Superman scoured the Multiverse for heroes who might threaten his rule-but he dismissed Prince Adam. Will he rue that decision now that he’s facing He-Man in the Oracle? Plus, Darkseid’s attack on Eternia has reached the walls of Castle Grayskull!
ON SALE 10.17.18
$3.99 US | 4 of 6 | 32 PAGES
FC | RATED T

SUPERGIRL #23
written by MARC ANDREYKO
art by KEVIN MAGUIRE
enhanced foil cover by STANLEY “ARTGERM” LAU
variant cover by AMANDA CONNER
Supergirl’s cosmic quest continues as she searches the galaxy for the truth about Rogol Zaar’s connection to Krypton’s destruction-and if there are any other culprits to be brought to justice. The library police are hot on Kara’s trail after she breaks into the Green Lantern database on Mogo, but she’s short on credits to pay the fine.
ON SALE 10.10.18
$3.99 US | 32 PAGES
FC | RATED T
This issue will ship with two covers.
Please see the order form for details.

SUPERMAN #4
written by BRIAN MICHAEL BENDIS
art and enhanced foil cover by IVAN REIS and JOE PRADO
variant cover by ADAM HUGHES
As Superman fights to protect the world from Rogol Zaar and the Kryptonian convicts trapped inside the Phantom Zone, the greatest minds on Earth devise a risky plan to return the planet from the deadly prison. With the Earth continuing to crack and crumble and its greatest heroes fall, can the Man of Steel hold the line and give his adopted world a chance to escape?
ON SALE 10.10.18
$3.99 US | 32 PAGES
FC | RATED T
This issue will ship with two covers.
Please see the order form for details.

AQUAMAN: THRONE OF ATLANTIS TP NEW EDITION
written by GEOFF JOHNS
art by IVAN REIS, PAUL PELLETIER,
JOE PRADO, PETE WOODS, PERE PEREZ and others
photo cover
Aquaman, who long ago lost contact with his people, must watch as armies emerge from the sea to attack the surface world. The Justice League answers the call to defend the shores from the invading Atlantean horde. But whose side is Aquaman on? With his brother Orm at the head of the undersea army, will Aquaman stand with his Earthbound superteam? Or his own people? Find out in this exciting hardcover collecting AQUAMAN #0 and 14-16 and JUSTICE LEAGUE #15-17.
ON SALE 11.21.18
$12.99 US | 192 PAGES
FC | ISBN: 978-1-4012-8358-2

ALL-STAR SUPERMAN TP
written by GRANT MORRISON
art and cover by FRANK QUITELY
The complete 12-issue run of ALL-STAR SUPERMAN by Grant Morrison and Frank Quitely is collected in a new trade paperback as part of the Black Label line!
Witness the Man of Steel in exciting adventures featuring Lex Luthor, Jimmy Olsen, Lois Lane, Bizarro and more! Plus: Superman goes toe-to-toe with Bizarro, his oddball twin, and the new character Zibarro, also from the Bizarro planet.
ON SALE 11.28.18
$29.99 US | 304 PAGES
FC | ISBN: 978-1-4012-9083-2

JUSTICE LEAGUE/POWER RANGERS TP
written by TOM TAYLOR
art by STEPHEN BYRNE
cover by KARL KERSCHL
Something terrible has happened in Angel Grove! When the Command Center is breached and the teleporters are damaged, Zack is flung into another universe, where he’s mistaken for a villain by a mysterious masked vigilante. Can the other Power Rangers get to their friend in time to save him from Batman? Collects Justice League/Power Rangers #1-6. Co-published with BOOM! Studios.
ON SALE 11.21.18
$16.99 US | 160 PAGES
FC | ISBN: 978-1-4012-8515-9

JUSTICE LEAGUE VOL. 1: THE TOTALITY TP
written by SCOTT SNYDER and JAMES TYNION IV
art by JIM CHEUNG, JORGE JIMENEZ DOUG MAHNKE and others
cover by JIM CHEUNG
Spinning out of the cataclysmic events of Dark Nights: Metal and JUSTICE LEAGUE: NO JUSTICE, the core members of the Justice League-Superman, Batman, Wonder Woman, Aquaman, the Flash and more-are reunited in all-new adventures! The League was forced to make an impossible decision…and now it’s time to face the consequences! The returning Martian Manhunter struggles to protect the team from an incoming threat that will shatter the world as they know it, while a familiar face strikes out on a dark path…This new title collects JUSTICE LEAGUE #1-7!
ON SALE 11.21.18
$17.99 US | 176 PAGES
FC | ISBN: 978-1-4012-8499-2

SUPERMAN: ACTION COMICS: THE REBIRTH DELUXE EDITION BOOK THREE HC
written by DAN JURGENS
art by VIKTOR BOGDANOVIC, RYAN SOOK, BRETT BOOTH, WILL CONRAD and others
cover by FRANCIS MANAPUL
Mr. Oz at last steps from the shadows-but the truth of his identity will rock the Last Son of Krypton to his core. And if Superman refuses to join Mr. Oz’s cause, maybe Superboy will! Then, Superman and Booster Gold travel back in time to verify the claims that Kal-El’s father survived the destruction of Krypton. What they find, though, is a vastly different world than history has shown. Collects ACTION COMICS #985-999.
ON SALE 11.28.18
$34.99 US | 352 PAGES
7.0625″ x 10.875″
FC | ISBN: 978-1-4012-8043-7

SUPERMAN VOL. 7: BIZARROVERSE TP
written by PETER J. TOMASI and PATRICK GLEASON
art by PATRICK GLEASON, DOUG MAHNKE, JOE PRADO, SCOTT GODLEWSKI and others
cover by JONBOY MEYERS
Superboy meets his opposite, the son of the Man of Steel’s most peculiar rival, Bizarro, in the conclusion to Peter J. Tomasi’s incredible SUPERMAN run. When Superboy comes face-to-face with Boyzarro, the Son of Bizarro, a strange transformation begins to take place. But that’s not all that the Kents have knocking on their door! Collects issues #42-45 and a story from SUPERMAN SPECIAL #1.
ON SALE 11.28.18
$16.99 US | 128 PAGES
FC | ISBN: 978-1-4012-8524-1 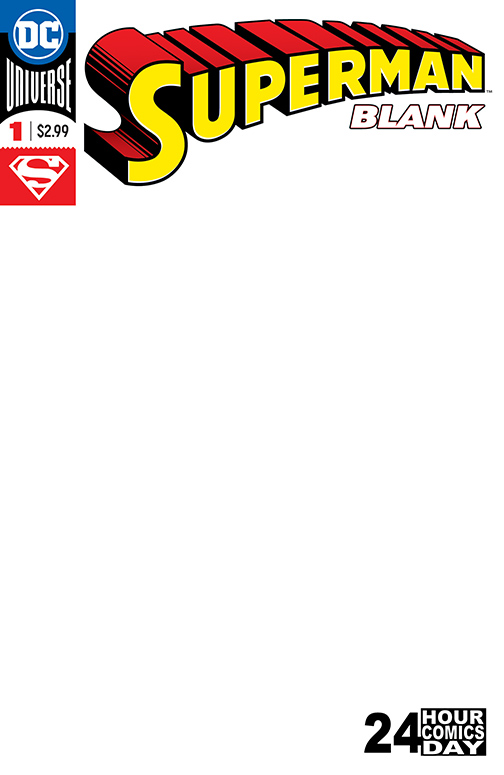 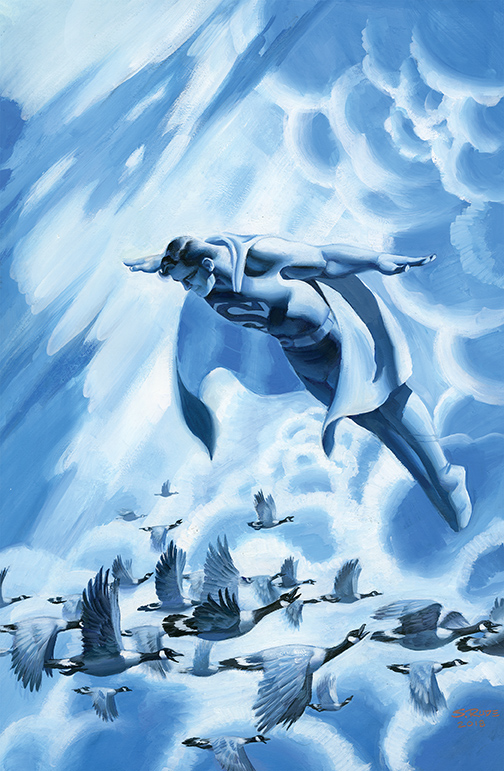 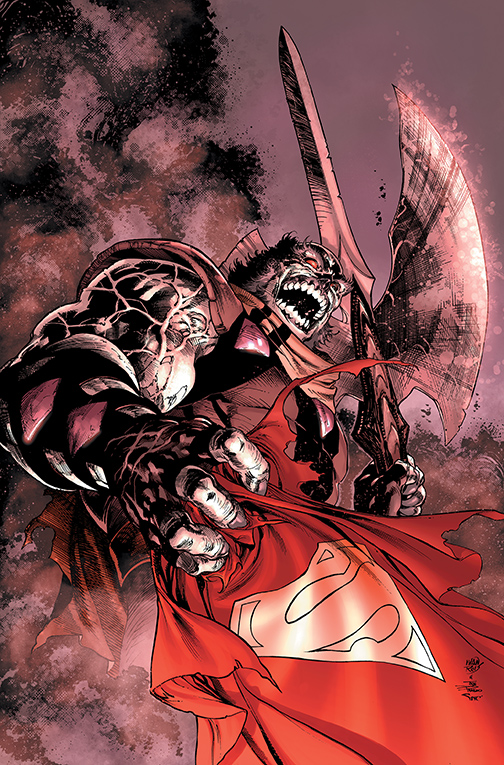 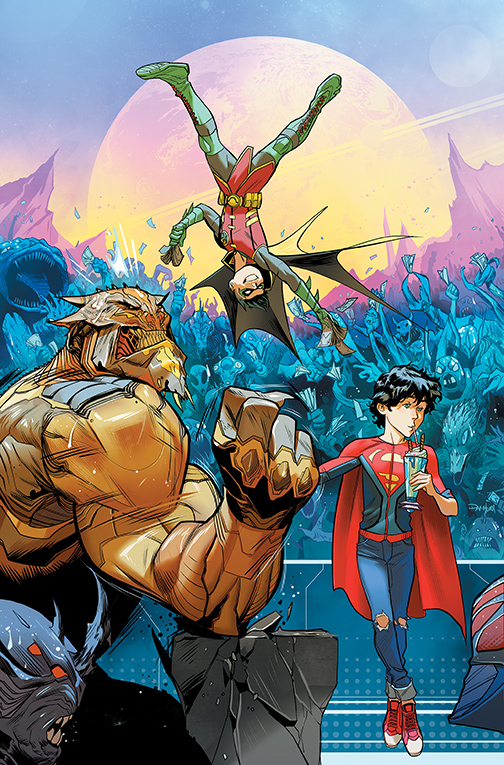 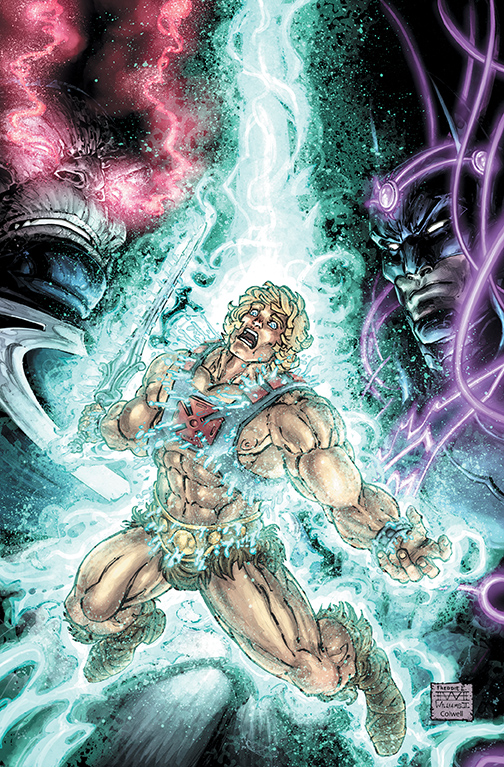 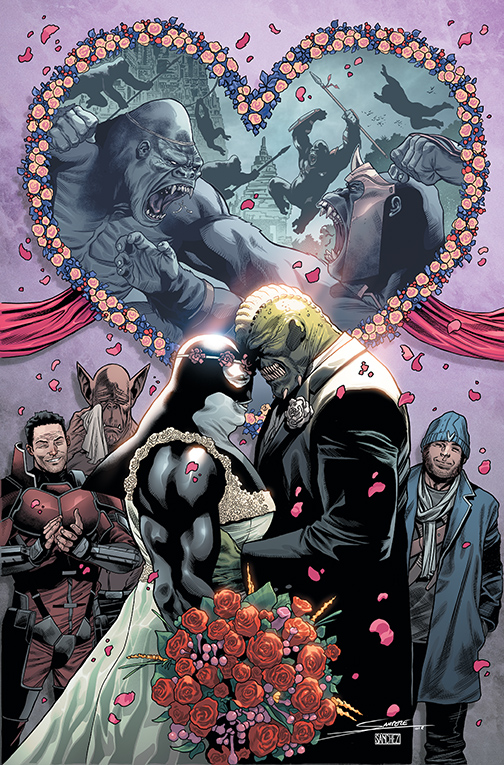 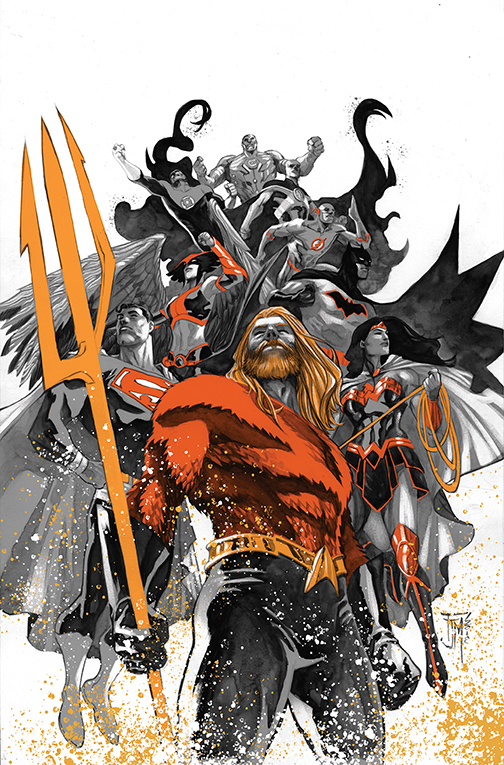 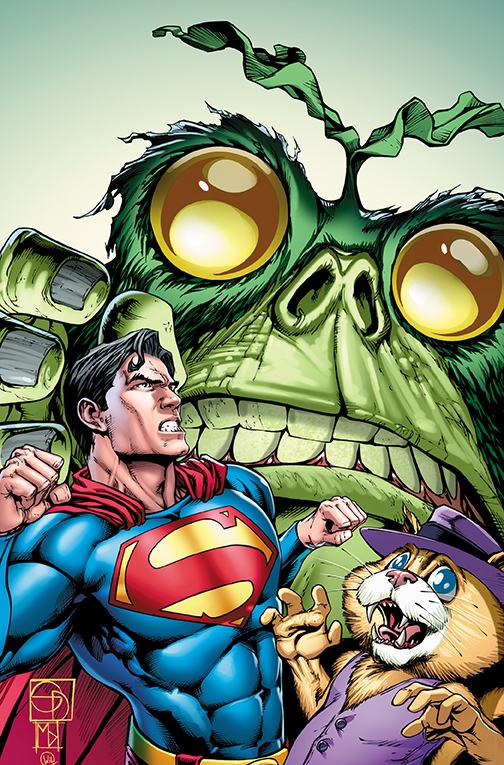 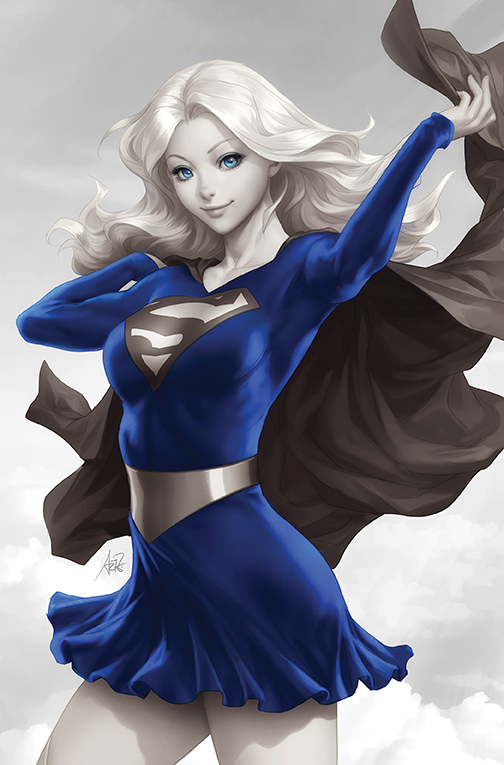 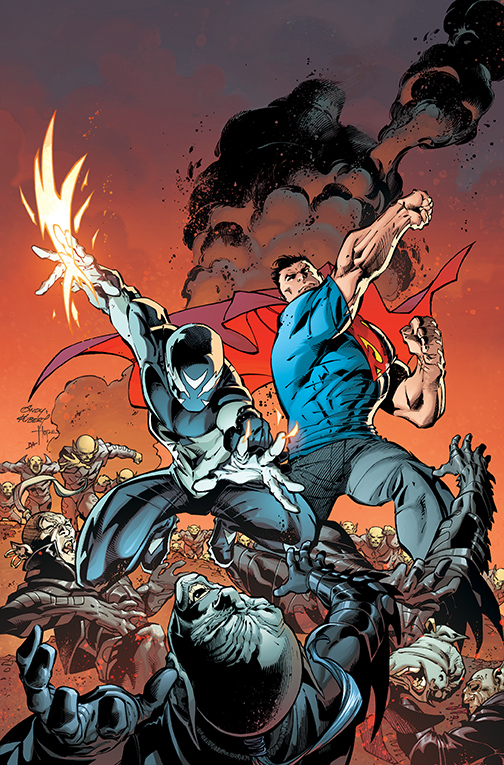 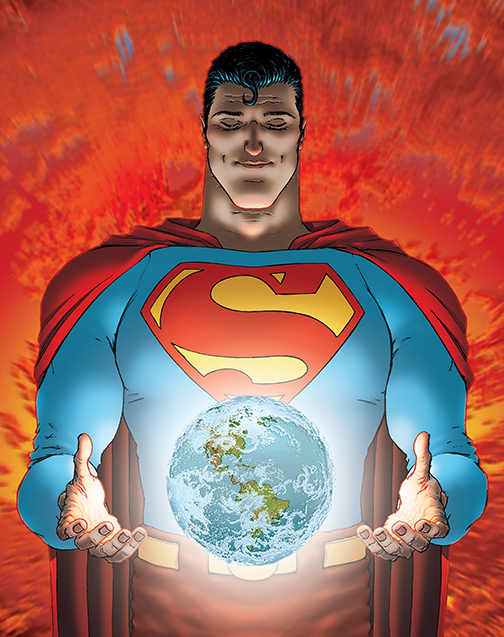 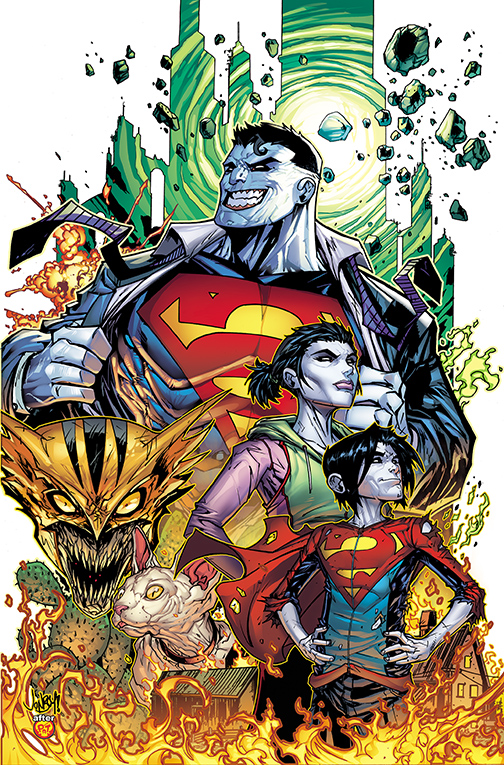 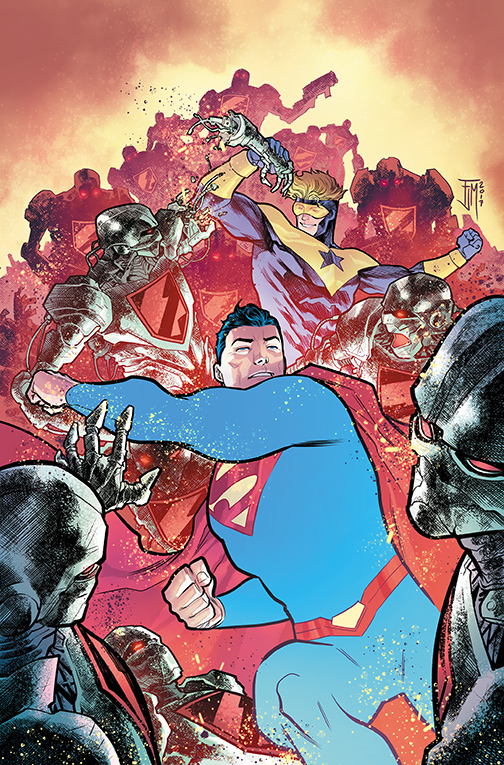 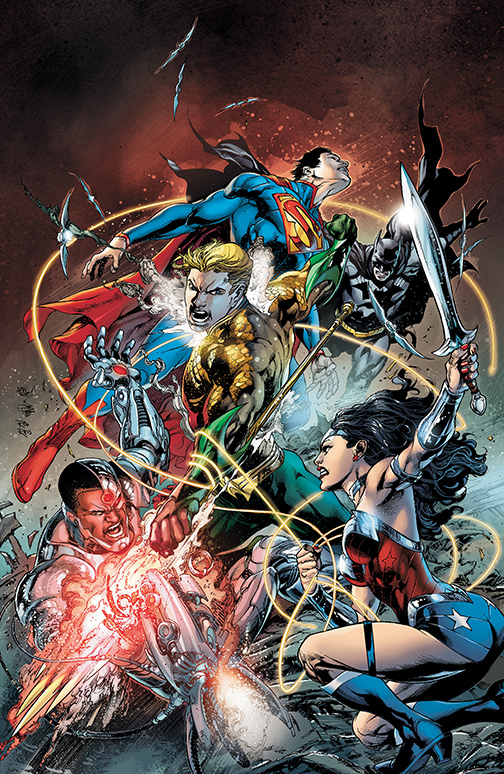 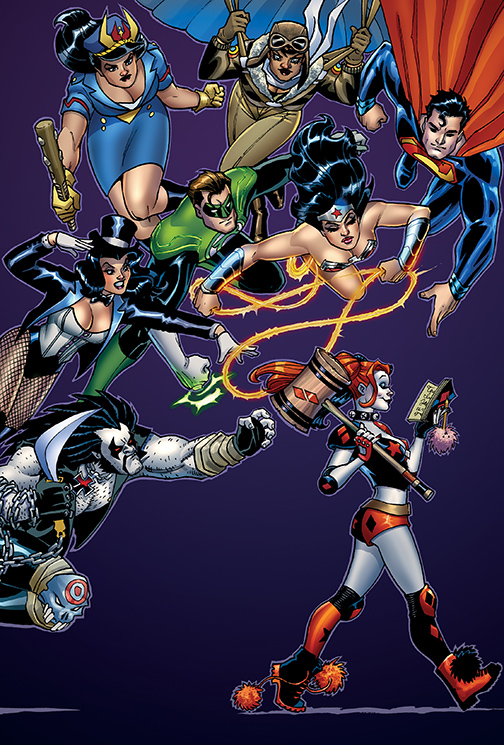 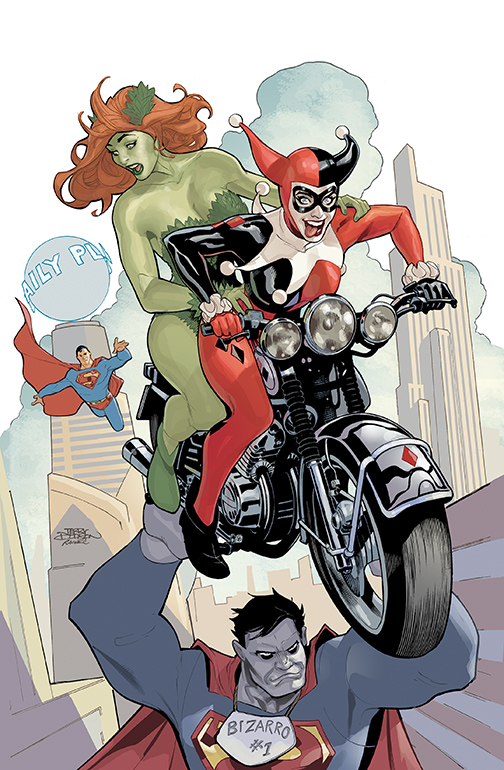 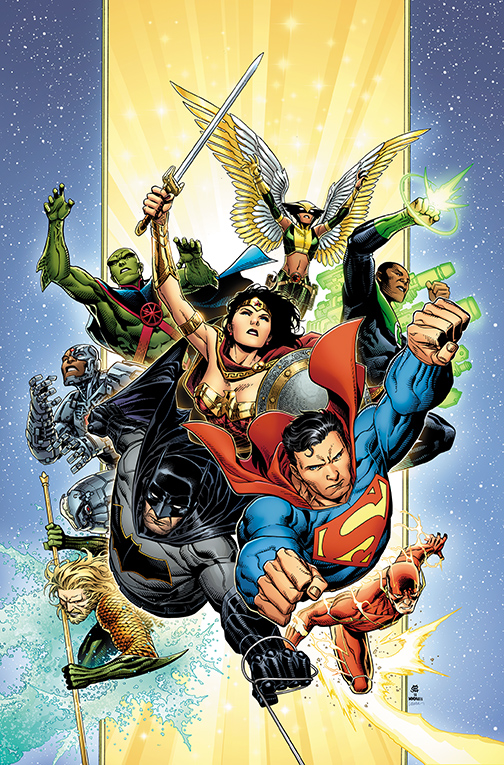 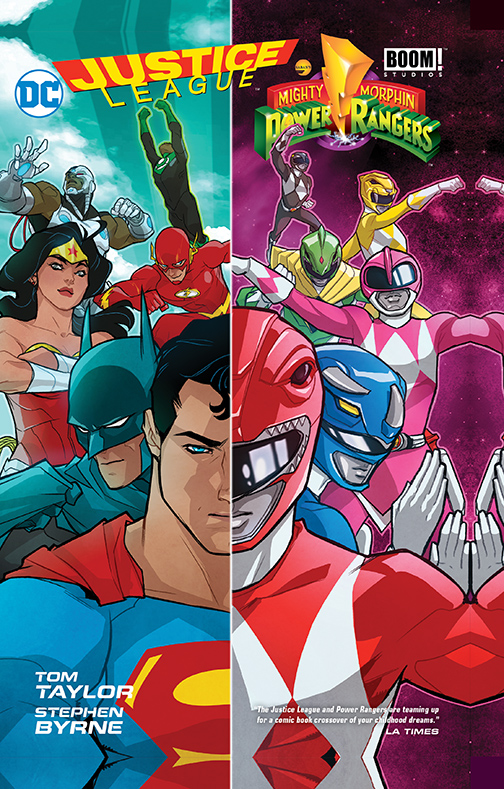 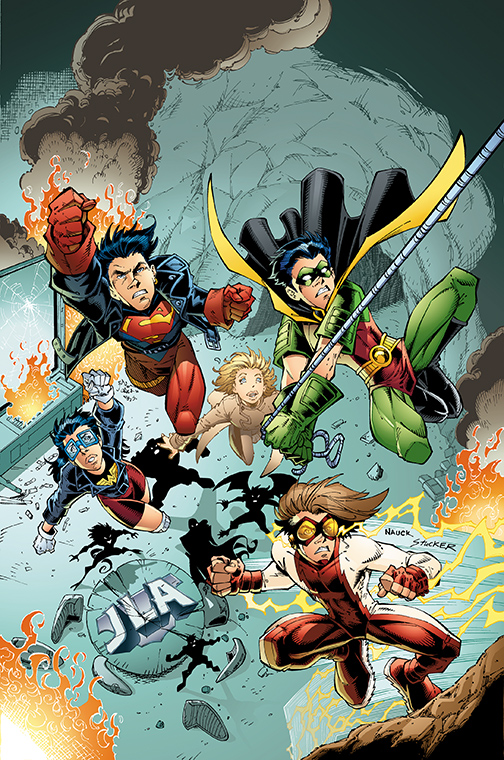 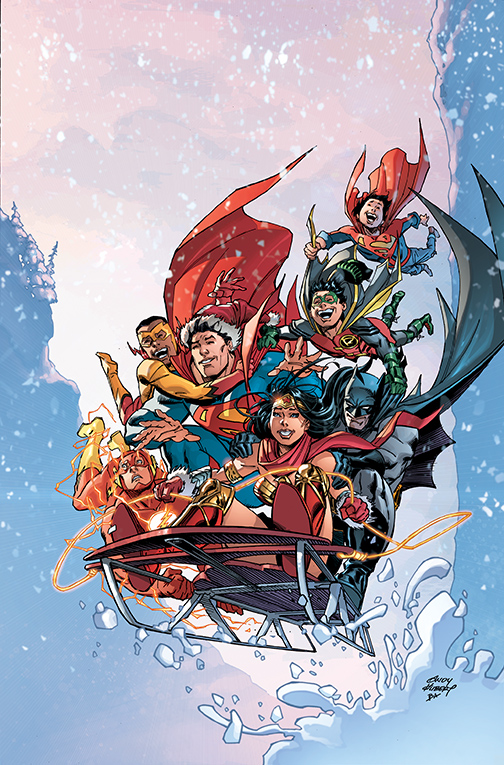 [REDACTED] seems to be very popular.