All This And Lex Luthor II

To everyone's surprise, Luthor has left a Will that says he leaves everything to his son by Dr. Gretchen Kelley. This being a soap op... er, comic, Dr. Kelley has, of course, disappeared. Until the heir can be found, a management committee runs LexCorp. And runs it very poorly.

The ghost of Luthor returns to haunt Superman in Action Comics #668. Sort of. The issue has another terrific cover (by Jurgens and McLeod), with Superman hovering in mid-air over Luthor's headstone. A weird energy bolt is striking Superman and a ghostly, maniacal Luthor fills the sky. The cover is only loosely connected to the story, which opens with Clark having a nightmare about Luthor. Luthor grabs Superman with a solid kryptonite hand. Then the skin melts off Luthor's face, leaving only a skeleton head.

Without Luthor at the helm, Metropolis is suffering from business failures, strikes, and unemployment. Talk shows and tabloids are speculating that Luthor still lives. To ease his own nightmares and to reassure the city, Clark convinces Cat Grant to run a television special. Cat reveals that, after the crash, Superman collected not only Luthor's mechanical hand, but also the scattered remains. The show goes on to say that the Special Crimes Unit had served Dr. Kelley with a search warrant for her medical records to compare Luthor's DNA to the remains. Cat concludes that the DNA tests showed a perfect match and therefore, the body found in the wreckage could only be that of Lex Luthor. Despite the evidence, the speculation continues -- but now people are arguing whether Luthor was murdered or committed suicide. Cat tells Clark "...it's almost as if Luthor's ghost has a press agent."

And, as the last page reveals, he does. Sydney Happersen, Luthor's aide who is in Australia with Dr. Kelley, has been planting the stories. "Because that's the way the boss wanted it."

We first meet Luthor's heir in Action Comics #670 and get further information on him in Action Comics #672. Lex Luthor II has a full head of flaming red hair, with bushy eyebrows and a beard (no mustache). He speaks with an Australian accent and uses many down-under phrases, such as "mate" and "g'day". Clark and Lois are skeptical and travel to Australia to investigate, but the evidence they find seems to support the new Luthor's story.

Although young Luthor's public persona is impeccably friendly and polite, we quickly learn that in private he is anything but. As he says in Action Comics #672, "They bought it! All of them! Hook, line and sinker!"

Luthor II quickly establishes himself as a business and a community leader. During the Panic In The Sky (Brainiac attacks the Earth -- collected in trade paperback), Luthor is on the front lines fighting the attackers and emceeing the victory celebration.

The title to Action Comics #678 lets the reader in on Luthor II's secret by proclaiming THEY SAVED LUTHOR'S BRAIN! The issue starts with an assassination attempt on Luthor by Dabney Donovan (rogue geneticist and clone creator). Donovan, from his hospital bed, confesses that he had been recruited by Luthor. He reveals that Luthor had faked his death and altered his DNA records to match those of the unnamed victim found in the plane wreckage. In a secret lab, Donovan and others removed Luthor's brain from his radiation ravaged body and place it in a jar where they grew a body around it. With better hair. Sleep teaching was used to give Luthor an authentic Australian accent. Finally, Luthor planted his will and allowed his company (and the city) to flounder so that he could return as his own heir and be the saviour of Metropolis.

Earlier, I described Luthor as a chess master. Make that a Seriously Twisted Chess Master (tm).

Consider Luthor's potential at this time. He has an opportunity to distance himself from his "father's" past and to start afresh. He has a new, young body (with that fabulous hair), a flourishing business empire, the love of Supergirl, and the respect of those who admired his "father" and now admire the new heir. He even has the grudging respect of Superman and the super-hero community due to his actions during the "Panic In The Sky". He can easily use legal and legitimate means to increase his wealth and influence. Typically, Luthor never even seems to consider this option.

Luthor's drive to seek power and to control those around him are both the characteristics that made him the success he is, as well as his greatest flaws. He does not seek success, respect, or admiration as his goal. These are merely tools to be used in his bid to conquer and control. If other tools (fear, intimidation, destruction, murder) are more useful to attain those ends, then he will willingly use those tools also. This Luthor has no love in his soul -- just hate and anger.

Luthor is such a nasty fella that it's always a treat to see him get his comeuppance -- even if only temporarily. Adventures of Superman #496 has Mxyzptlk in town to cause some fun and furor -- and to get back at Luthor. The whole city is remade in Mxy's image -- except Luthor II, who is changed into his old, fat self (with a hook in place of the prosthetic hand). The story is lots of fun, mostly at Luthor's expense. There is no real development of Luthor's character here -- but who cares! It's a fun prelude before events turn more serious -- as seen on the last page of the issue, which shows Doomsday breaking out of his container. Luthor had died and been reborn. Now, it was Superman's turn.

Life In A World Without Superman

During the fight with Doomsday, Luthor expects Superman to defeat the monster, as he always does. Ever the opportunist, Luthor tries to use the situation to his advantage. At a press conference he asks "does Metropolis need a champion who draws such negative attention? Does Superman's presence cause more harm than good?" (Superman: The Man Of Steel #19). I'll bet Luthor has a sign somewhere with the motto: "Whenever possible, always kick a good man when he's down."

During the fight with Doomsday, Supergirl is battered to protoplasm by Doomsday. Luthor, seemingly tenderly, wraps his jacket around her something that becomes very important later, in the Supergirl miniseries. As always, be even more wary of Luthor when he seems to be doing something nice. Luthor uncharacteristically tells Supergirl that he would have saved Superman if he could have, because "Superman would have owed me his very life ... and I never would have let him forget it." (Adventures Of Superman #498). Not that the sentiment is a surprise, but the fact that Luthor would drop his guard enough to show some of his real motivations to Supergirl perhaps show that he, too, is shaken by Superman's death.

Similar to his actions after Brainiac's attack during the "Panic In The Sky", Luthor sets himself as chief mourner to the public -- even organizing the funeral. When Luthor sees the body of Doomsday, he smashes a chair over the corpse yelling it's "JUST NOT RIGHT!" while thinking "Superman was mine to kill! Mine! I've been cheated of my vengeance ... a monster has robbed me of that which I desired more than anything!" (Action Comics #656). Inspector Turpin admires Luthor's apparently righteous anger. Now this is more typical Luthor looking like a rose to the public, while covered in thorns and planted in manure (hey, it's my analogy -- be kind).

In Superman #77, we see Luthor's evil triumph over his public persona. Luthor is working out with his trainer, Sasha, who manages to land a hard kick that knocks him to the mat. Luthor's anger rises quickly and he snaps "Nobody does that to me! Nobody! You've no bloody idea what trouble you've...," at which point Supergirl and Lois Lane interrupt him. Later that issue, Luthor murders Sasha and then brags about it over Superman's coffin. He says that he killed her to prove he is king again; back on the top. Again, as with teaching Mxyzptlk to lie, we see Luthor's arrogance and anger combined with rash actions. Luthor acts with no regard to the consequences. Also, as with Mxy, this will return to haunt Luthor. 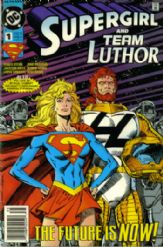 In the one-shot Supergirl and Team Luthor, Luthor offers Supergirl and his own security team as protectors of Metropolis. Luthor offers to personally lead his team against terrorists, but breaks his leg on his first outing. Luthor vows never to put his own life on the line again. Roger Stern, the primary writer for the Luthor II storyline, does a great job in this one-shot, showing Luthor II and his relationship with the city, and especially with Supergirl. I highly recommended the story. Ominously, at the end of the first story, he tells Supergirl that he wishes he had a hundred just like her.

Shortly after Superman's death, four new "Supermen" appear (Superboy, Steel, Eradicator and Cyborg). Typically, Luthor's first thought is to co-opt and control them. He attempts (unsuccessfully) to recruit the hormonal new Superboy in Adventures of Superman #502, by using the curvaceous Supergirl. Clearly, Supergirl is a tool to him -- although his anger at the way the Kid eyes his girl is also a trait of the possessive Luthor. When Luthor can't persuade Steel to join his team, he uses Steel's foe, the White Rabbit, to try and kill that hero in Superman: The Man Of Steel #24.

The four replacements are only temporary, as Superman returns from death. Surprisingly, Luthor has little reaction to the reappearance of Superman (in contrast to his reaction to Superman's return from space -- discussed in the previous article). In Adventures of Superman #505, Luthor sees Superman fly past and says, "No matter. If I can't control him, I'll destroy him."

Perhaps Luthor knew that he would soon have more important personal problems ahead -- as his cloned body begins to deteriorate.