DC Comics has released their February 2019 solicitations, and we've highlighted for you all the Superman-related comics and products listed. 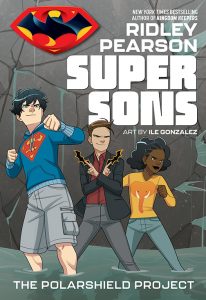 SUPER SONS BOOK ONE: THE POLARSHIELD PROJECT TP
written by RIDLEY PEARSON
art and cover by ILE GONZALEZ
The polar ice caps have nearly melted away, causing devastation to coastal cities. Erratic, deadly weather forces everyone inland, tearing families apart. Earth is facing its greatest crisis-and Superman and Batman are nowhere to be found.
Jon Kent and Damian Wayne are opposite in every way except one-they are the sons of the World's Greatest Heroes! To uncover a global conspiracy, this unlikely dynamic duo will need to learn to trust each other and work together to save the Earth. But who is the mysterious Candace? And what secrets does she hold that could be the key to everything?
From New York Times bestselling author Ridley Pearson (Kingdom Keepers) and artist Ile Gonzalez comes the first original graphic novel in an epic three-part series that follows the Super Sons of Superman and Batman as they struggle to find their place in a rapidly changing world!
ON SALE 03.27.19
$9.99 US | 5.5" x 8"
160 PAGES | FC
ISBN: 978-1-4012-8639-2

HEROES IN CRISIS #6
written by TOM KING
art by MITCH GERADS
cover by TREVOR HAIRSINE
variant cover by RYAN SOOK
Get a deeper look into the inner workings of Sanctuary. When heroes visited the facility, they relived their trauma through virtual reality, contending with the events that brought them there in the hope of reaching a meaningful resolution. That is, until the trauma took over and escalated these personal events into a full-blown crisis! Find out what pushed one of the superheroes over the edge and how it broke the machine. This special issue reunites the Eisner Award-winning MISTER MIRACLE team of writer Tom King and artist Mitch Gerads!
ON SALE 02.27.19
$3.99 US | 6 of 9 | 32 PAGES
FC | RATED T+
This issue will ship with two covers.
Please see the order form for details. 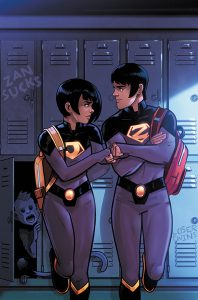 WONDER TWINS #1
written by MARK RUSSELL
art and cover by STEPHEN BYRNE
variant cover by DUSTIN NGUYEN
Exiled from their home planet, alien heroes Zan and Jayna must navigate life as teens on Earth at South Metropolis High School, where they're even bigger outsiders than the typical awkward young adults. Under the watchful eye of Superman, the brother and sister pull monitor duty at the Hall of Justice as interns, while also trying to overcome the pitfalls of Zan's brash confidence and Jayna's shy but streetwise persona. If you think you know the Wonder Twins, think again-this book takes the form of the unexpected.
ON SALE 02.13.19
$3.99 US | 1 of 6 | 32 PAGES
FC | RATED T
This issue will ship with two covers.
Please see the order form for details. 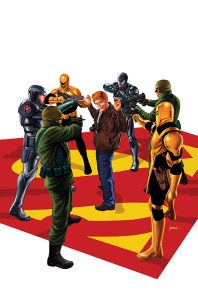 ACTION COMICS #1008
written by BRIAN MICHAEL BENDIS
art and cover by STEVE EPTING
variant cover by ESAD RIBIC
The superstar creative team of writer Brian Michael Bendis and artist Steve Epting dig into the DC Universe in this sweeping espionage epic that's shattering the agencies-and heroes-dedicated to protecting the world! As the D.E.O. falls, only Jimmy Olsen may hold the answers to helping Superman and Lois Lane uncover who's behind the attacks rocking the DC Universe's biggest clandestine organizations. And when the Suicide Squad's Amanda Waller makes a shocking discovery, can she help the trio understand the truth before the balance of power shifts to Leviathan forever?
ON SALE 02.27.19
$3.99 US | 32 PAGES
FC | RATED T
This issue will ship with two covers.
Please see the order form for details. 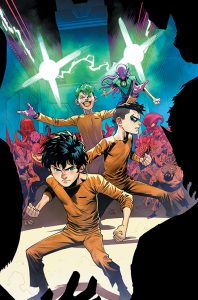 ADVENTURES OF THE SUPER SONS #7
written by PETER J. TOMASI
art by CARLO BARBERI and MATT SANTORELLI
cover by DAN MORA
Locked in an intergalactic juvenile detention facility, Superboy and Robin meet the youngest...and meanest...Green Lantern ever! Well, sort of a GL. Mostly a GL. Really more of a trainee, but don't tell the bad guys, okay? Plus, Joker Jr. returns...the clown who may be the boys' last, best hope to stop the Gang!
ON SALE 02.06.19
$3.99 US | 7 of 12 | 32 PAGES
FC | RATED T

JUSTICE LEAGUE #17
written by SCOTT SNYDER
art by JIM CHEUNG and MARK MORALES
cover by JIM CHEUNG
variant cover by WILL CONRAD
After the disastrous events of the Justice League Annual, Martian Manhunter
decides to take matters into his own hands and negotiate a peace with Legion of Doom leader Lex Luthor. Traveling to a distant moon, the two enemies face their intertwined pasts in a showdown for the fate of the Multiverse. However, before either of them can lay claim to the power of the Source Wall once and for all, an unexpected threat forces them to unite...or risk death at the ends of the cosmos.
ON SALE 02.06.19
#18 ON SALE 02.20.19
EACH $3.99 US | 32 PAGES
FC | RATED T+
This issue will ship with two covers.
Please see the order form for details.

JUSTICE LEAGUE #18
written by JAMES TYNION IV
art and cover by PASQUAL FERRY
variant cover by WILL CONRAD
The Legion of Doom returns as the history of the Legionnaires Club is revealed! Lex Luthor's mysterious connection to this ancient secret society runs deeper than even his Legion of Doom comrades ever suspected, and his secrets threaten to destroy everything. A blood connection to the dark underbelly of the DCU's history bubbles to the surface in this epic, villainous tale.
ON SALE 02.20.19
$3.99 US | 32 PAGES
FC | RATED T+
This issue will ship with two covers.
Please see the order form for details. 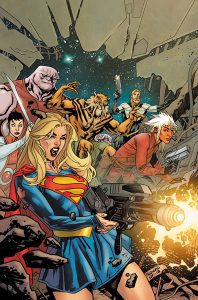 SUPERGIRL #27
written by MARC ANDREYKO
art by EDUARDO PANSICA and JULIO FERREIRA
cover by YANICK PAQUETTE
variant cover by EMANUELA LUPACCHINO
Caught in the middle of a Vega System civil war, a powerless Supergirl struggles to rescue as many slaves as she can from the brutal hands of the Citadel. Meanwhile, the Omega Men reel from the discovery that their long-dead colleagues-Nimbus, Harpis and Demonia-are mysteriously still alive! Kara, however, suspects there's more to their grand return than meets the eye...
ON SALE 02.13.19
$3.99 US | 32 PAGES
FC | RATED T
This issue will ship with two covers.
Please see the order form for details. 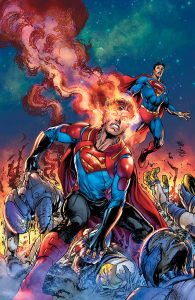 SUPERMAN #8
written by BRIAN MICHAEL BENDIS
art by IVAN REIS, JOE PRADO and BRANDON PETERSON
cover by IVAN REIS and JOE PRADO
variant cover by ROB LIEFELD
The epic secrets of Superman continue to unfold! A few months in space with his paternal grandfather Jor-El changed Jon Kent forever. With Jon now seeking help from his father, the Man of Steel must learn about the war his son and father fought together and set right the wrongs his father may have unleashed on other worlds. See what changed Superboy in such radical ways as the Unity Saga continues.
ON SALE 02.13.19
$3.99 US | 32 PAGES
FC | RATED T
This issue will ship with two covers.
Please see the order form for details. 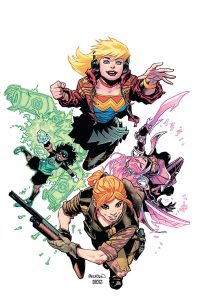 YOUNG JUSTICE #2
written by BRIAN MICHAEL BENDIS
art by PATRICK GLEASON and EMANUELA LUPACCHINO
cover by PATRICK GLEASON
variant cover by SANFORD GREENE
The new teen super-team unites as Robin (Tim Drake), Wonder Girl, Teen Lantern and Jinny Hex join forces to help Amethyst free Gemworld from those who control it. In another section of the strange dimension, Connor Kent and Impulse find themselves taken captive-but if this is really Superboy, why isn't he putting up a fight with his friend and former teammate against the bad guys?
ON SALE 02.06.19
$3.99 US | 32 PAGES
FC | RATED T+
This issue will ship with two covers.
Please see the order form for details. 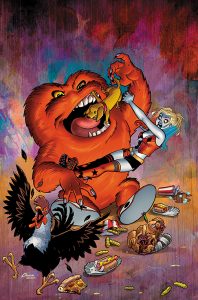 DC MEETS LOONEY TUNES VOL. 2 TP
written by GAIL SIMONE, SHEA FONTANA, JIMMY PALMIOTTI, AMANDA CONNER, SCOTT LOBDELL, MARK RUSSELL and others
art by INAKI MIRANDA, PIER BRITO, BRETT BOOTH, BRAD WALKER and others
cover by AMANDA CONNER
In this new helping of crossover tales, Catwoman finds herself embroiled in the endless battle between Sylvester and Tweety, and comes to the aid of her fellow cat. Then, Harley discovers a mysterious crate washed up on Coney Island's shore and releases the big, hairy beast that is Gossamer. Daffy Duck visits Gotham City to see Acme headquarters, but discovers the building abandoned and overtaken by the Clown Prince of Crime. And Porky Pig takes an entry-level job at LexCorp, only to find himself hauled to Washington, D.C. Collects Catwoman/Sylvester and Tweety Special #1, Harley Quinn/Gossamer Special #1, The Joker/Daffy Duck Special #1 and Lex Luthor/Porky Pig Special #1.
ON SALE 03.13.19 | $16.99 US | 168 PAGES
FC | ISBN: 978-1-4012-8833-4 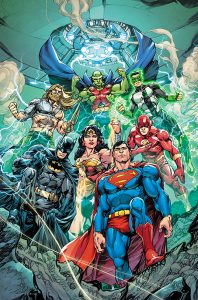 JLA: NEW WORLD ORDER (DC ESSENTIAL EDITION) TP
written by GRANT MORRISON
art and cover by HOWARD PORTER and JOHN DELL
The world's most classic heroes reunite to stop the world's newest champions. Posing as a new group of super-heroes, the Hyperclan have descended upon Earth, convincing everyone that they are a benevolent force. But as their true nature and plans come to light, only the World's Greatest Heroes can stop them. Standing side by side, Batman, Superman, Wonder Woman, Aquaman, the Flash, Green Lantern and the Martian Manhunter take on the alien posers and come to realize that Earth needs a force made up of only the mightiest of heroes. Collects JLA #1-9 and JLA SECRET FILES #1.
ON SALE 03.06.19
$19.99 US | 248 PAGES
FC | ISBN: 978-1-4012-8865-5

JUSTICE LEAGUE OF AMERICA: THE BRONZE AGE VOL. 1 TP
written by DENNIS O'NEIL, ROBERT KANIGHER and MIKE FRIEDRICH
art by DICK DILLIN, JOE GIELLA and NEAL ADAMS
cover by KARL KERSCHL
In these adventures of the Justice League from the early 1970s, classic members of the League including Superman, Batman, the Flash, Green Arrow, the Atom and Black Canary battle villains including The Joker and the Doomsters, and meet supernatural heroes including the Spectre and Deadman! Collects JUSTICE LEAGUE OF AMERICA #77-95.
ON SALE 03.27.19
$29.99 US | 416 PAGES
FC | ISBN: 978-1-4012-8902-1 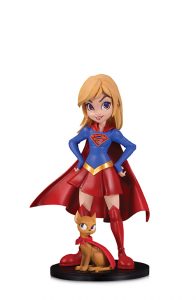 DC ARTISTS ALLEY: WONDER WOMAN, HAWKGIRL, SUPERGIRL AND BATGIRL BY CHRISSIE ZULLO VINYL FIGURES
Chrissie Zullo was discovered via the DC Comics Talent Search a decade ago. Since then Chrissie has worked in all facets of the industry, doing work on interiors, covers and variants for multiple titles and publishers. Created with a dreamlike, fairy-tale aesthetic, her work is modern in both origin (she uses both analog and digital tools in her work) and subject matter (video games, films by Miyazaki and Disney, Star Wars). While her work covers many subjects, an aura of joy and positivity emerges from each piece she creates.
sculpted by IRENE MATAR
STANDARD FIGURES
- Limited to 3,000 pieces
- Individually numbered
- Allocations may occur
- Final products may differ from images shown
- Approximately 4 units per carton
ON SALE JULY 2019
$60.00 US
EACH FIGURE SOLD SEPARATELY 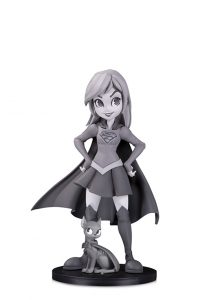 BLACK & WHITE VARIANT FIGURES
- Limited to 1,000 pieces
- Individually numbered
- One Black & White figure may be purchased for
every 3 standard figures purchased.
- Allocations may occur
- Final products may differ from images shown
- Approximately 4 units per carton
ON SALE JULY 2019
$60.00 US
EACH FIGURE SOLD SEPARATELY