Superman's "S" emblem, the stylized red S on a yellow diamond-shaped shield with the red border, is likely one of the most recognized icons in both our world and the fictional Earth-DC. But who created it? Who came up with that eye-catching design?

Well sure, Superman creators Jerry Siegel and Joseph Shuster created the "S", the spit-curl, and even the red undies. But how do the comics, movies, and TV shows explain the origin of the "S" emblem - is it an extraterrestrial symbol or just something Pa Kent dreamt up while harvesting a field of poppies? As with most things concerning an eternally young 70-year old character, the answer is that it depends who you ask.

For instance, ask Bryan Singer, the director of 2006's "Superman Returns" and he'll tell you what he recently told Wizard Magazine in its Spring 2005 Mega Movie issue - that the Superman suit "he (Supey) wears is a remnant of that world (Krypton)..." Singer apparently bases that opinion on 1978's "Superman: The Movie" in which the costume is Kryptonian fabric and the "S" emblem is a family crest worn by Superman's biological father, Jor-El. Singer's film will fit within a "vague history" of the 1978 movie's plot. While the comic book explanation for the "S" differed from the movie's explanation for most of the 67 years of Superman's adventures, Mark Waid's recent revamp of Superman's origin in "Superman: Birthright" tied the "S" to Krypton, effectively unifying the different media interpretations for the "S".

The earliest comic references seem to indicate that Clark designed the "S" logo along with the costume itself. In "More Fun Comics #101," the narrative explained that Clark "secretly fashion[ed] a colorful red-and-blue costume - and thus [was] born - Superboy." Though the "S" emblem isn't mentioned explicitly, it can be assumed that its design was part of the "secret fashion[ing]" that Clark did in making that first Superboy costume.

Superboy muddies the waters a bit when he declares that he "chose" the "S" emblem - not designed or drew but chose - "to stand for Superboy, and later Superman - [but] it will also mean Saving lives, Stopping crime, and giving Super-aid wherever it's needed." It can be assumed that Superboy's use of the word "chose" can be attributed to an error in word choice, rather than an attempt to claim someone else designed the "S".

Subsequently, mostly in Superboy comics, baby Clark Kent has adventures as Superbaby. These stories explain that Martha Kent, Superbaby/boy/man's adoptive mother, sewed together Superbaby's play suit out of the blankets that accompanied baby Kal-El in his rocket ship to Earth. The same blankets are used to fashion Superboy's costume. However, the Superbaby costume has no "S" on it. This is consistent with the explanation that Clark designed the emblem later in life - and also explains why Beppo the Super Monkey has no "S" on his costume either since he began as Superbaby's contemporary.

Even if you didn't read comic books, by 1952, anyone with a TV could have told you that Ma Kent made Clark's costume and therefore presumably designed the "S" emblem. In "Superman on Earth" (Sept. 19, 1952) - the introductory episode of "The Adventures of Superman" - Clark's adoptive mother takes Clark to the Smallville bus depot after Pa Kent's death so he can move to Metropolis and start being super full time. Ma Kent (known in this episode for some reason as Sara Kent) asks if Clark remembered to bring the costume she made for him out of the blankets he was wrapped in when she and Pa Kent found him. Strangely, the first man rescued by Superman refers to him as "this . . . super man" so, if Ma Kent designed the emblem, it is coincidence that ultimately earns him the name-he-travels-under.

In December 1978, "Superman: The Movie" provided a new explanation for the "S" emblem. It wasn't an "S" at all, but a Kryptonian symbol that served as a family crest for the -El family. Apparently, the "S" stood for "El" and it was Lois who connected the symbol on his chest with the letter "S" and the name Superman.

In the anniversary issue, "Action Comics #500", it's explained that Pa Kent designed the stylized "S". By this point, it was established continuity that Ma sewed the super suit, so giving Pa the artistic skills to create the "S" icon probably seemed like a logical way to keep both of Clark's Earth parents involved in creating Superman's look.

Perhaps spurred by the film's crafting of an extraterrestrial origin for the "S" emblem, a mid-80's pre-Crisis Superman tale changed the comic origins of the "S" logo one more time. In "Superman Annual #10" (1984), the logo is again something Pa Kent dreamed up. However, Jonathan Kent apparently formed a psychic connection with the legendary "Sword of Superman". The sword formed during creation's Big Bang with an "S" logo emblazoned in its handle; this "Sword of Superman" floats around space for centuries until it finally comes into contact with Superman. When Superman grasps the sword, it begins to make him an all-powerful, all-knowing super deity. Superman rejects the sword's power so he can remain Earth's greatest hero.

In 1987, John Byrne revamped Superman's origin and completely restarted the character from scratch in the six issue "Man of Steel" miniseries. Though Byrne incorporated many of the first film's conceits, including the idea of Krypton as a cold, sterile planet, he maintained that Clark himself designed the "S" logo. While Ma Kent sewed the costume out of ordinary Earth fabric, which derived near invulnerability through its close proximity to Superman's aura (and explaining how Big Blue goes through so many capes), Clark designed the "S" emblem, which his mother incorporated into the final suit.

The two historical explanations for the design of the "S" emblem collide in the 1988-1992 syndicated television hit, "Adventures of Superboy". In the flashback episode, "Countdown to Nowhere", Superboy meets Lana Lang for the first time when he rescues her from terrorists who've pushed her out of a helicopter and are attempting to sabotage the space shuttle launch. He's wearing the full costume with "S" emblem and he introduces himself to her as Superboy notwithstanding that the show was supposed to be loosely based on the movies' continuity, in which the "S" logo had Kryptonian origins - and Superboy didn't know he was from Krypton at all during the run of the show. As if to muddy things further, a two-parter the following season -- "Abandon Earth" and "Escape to Earth" -- had Superboy's biological father wearing the "S" emblem as a family crest as he did in the first "Superman" movie. By the end of the two episode arc, the entire incident was erased from Superboy's mind. DC published an "Adventures of Superboy Special #1" following the series' run that explained the Superboy series as the teenage fiction writing of future journalist Clark Kent.

In September 1992, Dean Cain became the most recent live action Superman in "Lois & Clark: The New Adventures of Superman". Ma Kent designs the Superman costume without the emblem in a scene that cleverly evokes the "Man of Steel" comic book miniseries. As she considers that the costume seems incomplete, she remembers the "S" emblem that she and Pa Kent found with baby Kal-El's blankets in the rocket. She pulls the fabric "S" logo out of a folder and sews it onto the costume. In later episodes, the "S" logo is shown imprinted on the rocket ship itself. Only at the end of the pilot does Teri Hatcher's Lois Lane connect the emblem with Superman's name.

Continuing the dichotomy that exists between Superman's filmed origins and his comic book beginnings is 1996's "Superman: The Animated Series". After Ma and Pa Kent tell teenage Clark that he's an alien in the three-part pilot, "Last Son of Krypton", they give him a box with an odd symbol on it, explaining that they found it in the rocket with baby Kal-El. When Clark holds the box for the first time, the strange symbol morphs into the now familiar "S" emblem and Clark learns telepathically about Krypton.

John Ostrander's 12-issue 1999 maxi series, "The Kents", includes a new origin for the "S". In "The Kents", Clark and his adoptive father, Jonathan pore through letters and other artifacts belonging to the first Kents to settle in Smallville, Kansas. Included with the letters and other items is a royal blue blanket with a crude "S" emblem on a shield. The blanket belonged to Kent ancestor Mary Glenowen, who was part Native American. She explains to her future husband Nathaniel Kent that each of the five sides of the diamond shield represents the five Iroquois Indian tribes that remained, and the "S" was a snake, considered to be a symbol of healing.

The blanket is presumably owned by Nathaniel and Mary Kent throughout their marriage as it's left with the strong box found by Clark's father. This explanation makes no sense as Clark is already Superman by the time his father ever sees the blanket. Nonetheless, this was considered established canon as it's included as an explanation for the logo's origin in Scott Beatty's "Superman: The Ultimate Guide to the Man of Steel". Confusing matters even more, right next to this explanation in Beatty's "Guide" is the statement that Clark himself designed the "S" logo - even though he presumably had not seen or heard of his ancestor's blanket until much later. This sounds like a job for Hypertime.

TV's mega-hit "Smallville" is all about exploring the hero's back-story so it was natural they'd provide an explanation for the "S" - in fact, they've provided two explanations. In the first season episode, "Rogue", Lex Luthor explains to Clark that Alexander the Great wore a breast-plate in battle that had a jeweled "S" type logo. According to Luthor, "the design symbolizes strength and courage." Clark responds ironically: "I can't exactly see myself going into battle with that on my chest."

In subsequent seasons, a Kryptonian symbol that resembles the "S" emblem shows up in mysterious caves in Smallville, on an octagonal shaped Kryptonian key, and eventually on Clark himself when Jor-El (or his spirit or someone/something that claims to be Jor-El and/or his spirit) burns the symbol into Clark's chest. To date, it's unclear what the symbol represents.

Finally, in 2002, "Superman: Birthright" incorporates the movie explanation for the "S" emblem as Jor-El is wearing it on Krypton. However, as on "Smallville", the "S" appears to be more than just a family crest. According to Clark: "At first, I thought it (the emblem) was a family crest of some sort - but if it was, it certainly came to mean more than that to these people. Wars were fought over it. Entire cities were built on it. Over the course of time, it became a... a promise. A sign of people fighting to make a better world. A symbol of hope."

Some questions should have simple answers. The question of where Superman acquired that unique "S" emblem should be such a question. But that's the fun of a character with such a long history - someone's always revisiting questions related to the hero's origin. Attempts to put a fresh spin on Superman naturally look to the most iconic attributes of the hero and what's more iconic than the icon? 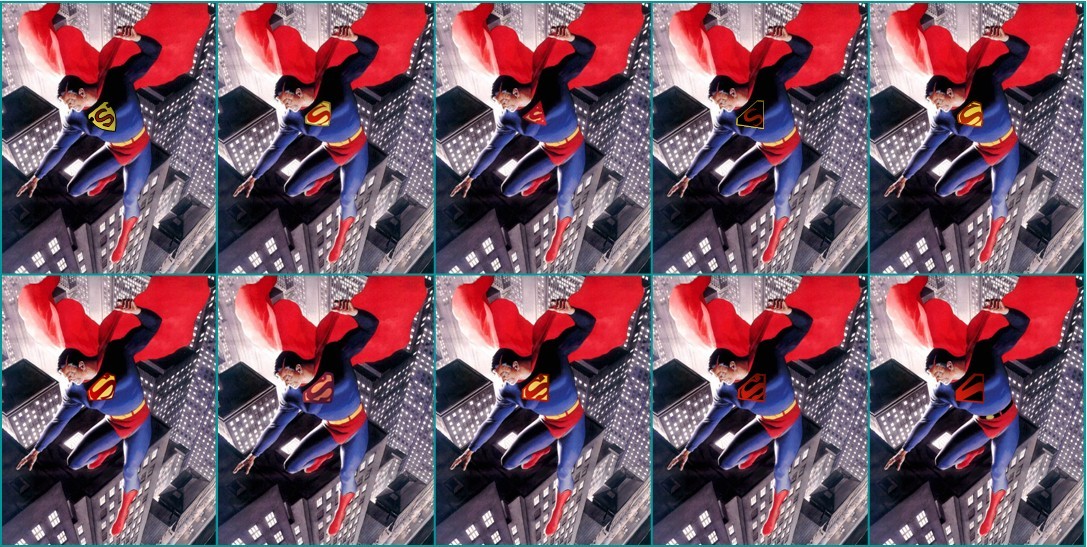 'Evolution of the "S" Symbol' artwork thanks to Dan Hislop (daniel.t.hislop@lmco.com)