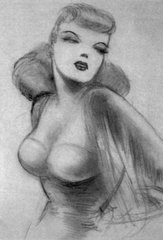 The True Inspiration for Lois Lane

There has been a lot of speculation about how my late husband Jerry Siegel created Superman's girlfriend Lois Lane. Many years ago, Jerry asked me to set the record straight regarding a false story that had been repeated for years. Finding a way to do this has not been easy. I have tried, but the false information continues to be printed. A few people have read Jerry's own words on the subject in a May 30, 1988 TIME Magazine Letter to the Editor he wrote to make corrections to an article they had printed. Many people probably missed his letter and believe the false story concerning Lois that appeared in the TIME article which was also printed in several books. With all the recent interest in Superman, the old, untrue story about who inspired Lois has resurfaced and it is time for people to learn the truth from Jerry, as he was the only person who knew what inspired him when he first wrote the character.

Jerry wanted people to know that Lois Lane was not based on or inspired by anyone who went to Glenville High School in Cleveland. In the following letter to TIME Magazine, he makes it clear that the inspirations for Lois Lane were movie actresses Glenda Farrell and Lola Lane:

Lois Lane = Torchy Blane
Thank you for saying "Happy Birthday" to Superman [SHOW BUSINESS, March 14]. Joe Shuster and I, the co-creators of Superman appreciate it. My wife Joanne was Joe's original art model for Superman's girlfriend Lois Lane back in the 1930s. Our heroine was, of course, a working girl whose priority was grabbing scoops. What inspired me in the creation was Glenda Farrell, the movie star who portrayed Torchy Blane, a gutsy, beautiful headline-hunting reporter, in a series of exciting motion pictures. Because the name of the actress Lola Lane (who also played Torchy) appealed to me, I called my character Lois Lane. Strangely, the characterization of Lois is amazingly like the real-life personality of my lovely wife.
Jerry Siegel
Los Angeles