The Mystery Behind the LL Initials

Lois Lane. Lex Luthor. Lana Lang. Lori Lemaris. Lyla Lerrol. Linda Lee. These are just a small selection of characters from within the Superman universe who share the LL initials. But why? What's the LL connection for Superman?

For years, even before I took over as the webmaster of this website, the answer listed in our "Superman FAQ" stated the answer to that question as: A rumor says that these names were chosen because Joe Shuster's first girlfriend had the initials LL.

Where this rumor came from is anyone's guess. I've been unable to verify if Joe Shuster did indeed have a girlfriend with those initials.

In his book "Superman: The High-Flying History of America's Most Enduring Hero" author Larry Tye writes:

One thing neither Mort nor Jerry had trouble with was naming their characters. Both began with the premise that every name had to have two L's, ideally at the start. Jerry signaled where he was headed with his spelling of Superman's Kryptonian name, Kal-L. The second-most important person in the Superman universe - Lois Lane - offered another clue and a beginning to the L's taking their place up front. Lois's sister was Lucy Lane while her parents were Ella and Samuel. Lana Lang, Superboy's neighbor and best friend, had a father named Lewis and siblings Larry, Alvin, and Ronald. Enemy number one originally had just one name, Luthor, but in 1960 editors decided to soften him up by adding a given name, Lex. His sister was Lena, his parents Lionel and Letitia, and an Aunt Lena helped raise him. Over the years Superman, Superboy, or Clark fell in love with Lyla Lerrol, Sally Selwyn, Lyrica Lloyd, Lal Leta, Lahla, and Lori Lemaris, whose sister was Lenora. Superboy would team up with Lightning Lad and Lightning Lass against Lightning Lord.

Why the letter L and the alliterations? Jerry never said, nor did Mort. Not even Superman was talking. When Supergirl told him that she had chosen the name Linda Lee for her disguise, he commented how, "by sheer coincidence," she had picked the same initials as everyone else he held close. The truth was it was just for fun. The echo appealed not just to the ears of his writers and editors, but to young readers, the same as with fan favorites like Peter Parker, Bruce Banner, Archie Andrews, Mickey Mouse, and Bugs Bunny. Once Jerry got it rolling, Mort turned it into a game for readers, scores of whom wrote in whenever they uncovered a new one or wondered why someone as close to Superman as Jimmy didn't have the two L's. Mort's answer: He did. Don't you remember George Reeves's TV episode, "The Talkative Dummy," which revealed Jimmy's full name as James Bartholomew Olsen.

As Larry explained, alliteration, the repetition of a particular sound in the first syllables of a series of words, has always been a popular trope in the naming of comic book and cartoon characters. So it's reasonable to assume that the whole LL thing was entirely unintended at first, with Lois Lane simply the first in a long line of characters with those initials.

This tradition has reached every medium the character has appeared in, with writers even telling stories that made mention of this LL tradition.

In "Superman #157" (dated November 1962) a story appeared titled "Superman's Day of Doom!". Superman is given a prediction machine which has the power to predict the answers to three future problems. With Clark Kent having recently been threatened by a gangster, he asks the machine who will rescue him if he is attacked. The machine's answer? "..L..L..". Later that day Bizarro leaves Superman a piece of Kryptonite as a "gift". Weakened, and unable to move, Superman thinks back to the prediction machine's answer and wonders which of his friends with LL initials will come to his rescue. Unfortunately neither Lois Lane, Lana Lang, Lori Lemaris, Lightning Lad, or Linda (Supergirl) Lee Danvers are aware of his plight. A boy by the name of Steven Snapinn comes by and helps Superman get rid of the Kryptonite. As he turns around Superman notices the words "Little League" on the back of the boy's jacket. 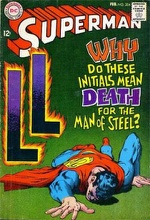 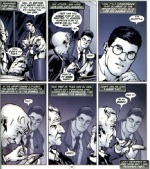 "The Case of the Lethal Letters" appeared in "Superman #204" (dated February 1968). In this story Lorraine Lewis, a brilliant scientist who falls in love with Superman, goes about trying to prove her worth as wife material for the Man of Steel. At each turn she is upstaged by either Lois Lane, Lana Lang or Lori Lemaris, and her obsession drives her mad. She captures the three woman and lures Superman into a deathtrap.

Many years later, in 2005, Greg Rucka tells a story in "Adventures of Superman #646" in which Clark and Mr. Mxyzptlk are sitting in a diner discussing the whole LL initials topic. Apparently when you place the Kryptonian equivalent of "LL" together you get an image which closely resembles the symbol for infinity.

So while we may never truly know the real reason behind the LL tradition within the world of Superman, it is a tradition that has been there from the very beginning, and one that will continue for many years to come.

[Note: Excerpt from "Superman: The High-Flying History of America's Most Enduring Hero" used with permission of the author]