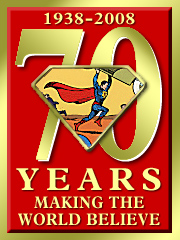 Ten years ago I wrote an article for this website titled "Superman: The Appeal of a 60 Year Legend". So much has changed since 1998. There have been both tragedy, pain, and sorrow including joy, laughter, and cheer.

I have encountered those things during that time. At one point, I nearly had forgotten who I am and it took two difficult years to remind me of my value and a lot of growth. During that time, I didn't read Superman much at all.

Recently, I have been rereading the article I wrote ten years ago and realized that my words are strong and that I should rely on them for strength, which has also been a help for me. As for Superman; I am glad that current writers such as Grant Morrision, Geoff Johns, and Kurt Busiek are taking Superman very seriously and respecting the character's history, while still making him contemporary.

Back in 1998, I was concerned about the state of the comic book industry due to both the decline of comic books (because some people had bought them for the wrong reasons) and when Carl Icahn nearly brought Marvel Comics to the ground back then. It's good that the industry is recovering and Icahn no longer owns Marvel.

I am still concerned about the industry because I am a fan first and foremost. This is a medium that crosses all races, genders, and generations. Comic books have helped me learn about the world around me and have an interest in reading books, which I still have to this day, when I need to get away from watching TV and the internet.

It would be nice if Siegel and Shuster were still alive, despite how they have been treated and the financial legalities concerning their creation. I would shake their hand and hug them to thank them for creating Superman. Why? I didn't have any positive male role models as a kid and Superman helped me through those difficult times growing up. And to let them know that what they have endured was sad, they aren't forgotten and that Superman lives through them.

Superman has shown me how to be not only a good person, but a better one too. Our focus has been on so called "role models" who don't live up to the standards they set and have compromised them for greedy and selfish reasons. Superman may not be a real person, but he is timeless.

Superman has endured for the past 70 years and has evolved. He has kept the essence of who he is the same. That is a lesson for all of us as well... don't be afraid of change, but don't change who you really are.

I want to wish Superman a happy birthday and for everyone to look up in the sky... it's a bird, it's a plane... No, it's Superman!