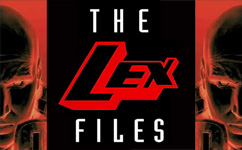 Wayne just gave me a huge clue as to the nature of Superman's powers. (Wayne, of course, is more commonly and more crudely known as "Batman". Why do I call him 'Wayne'? Let's say it's my affectionate nickname for him.)

I find I can always count on Wayne. On my seemingly endless quest to crack the walking puzzle that is Superman, I enlist all the allies I can find. Of course, Wayne isn't aware he's an ally, but I find that those careless or naive enough to allow my use of them are perhaps the truest allies one can find.

I've long understood that Superman's incredible abilities are in some way coming from the sun. And now, if Wayne is to be believed, Superman takes in about 140 gigawatts of power from the sun. This is, of course, pretty much impossible. That is to say, that's many times more power than hits the surface area of Superman's body from the sun (which we know is about 240 watts per square meter). 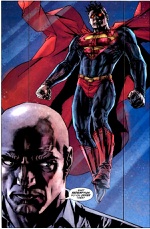 When I heard this, of course, my heart skipped a beat. A clue, even one that suggests an impossibility, is like a loose thread hanging from a tapestry. Once you find the thread, if you're careful and persistent, you can eventually unravel the whole thing.

Since I was a young boy I learned to look for these threads. Clues. When you tug on them, you can learn to understand practically everything. And when you can understand something, no matter what it is, you can manipulate it.

People like to claim to me that there are some things which can't be understood. Things with no attached threads. But every time I've ever been presented with such a claim, I've always - unfailingly - found the threads.

So imagine my reaction when Superman appeared. A being who apparently defies the laws of physics. A seemingly benevolent god who earns the worship of the people through sheer good intentions and good looks. And most importantly, a tapestry with no loose threads.

How does he do it? Is it some sort of advanced magic trick? But I tested that, and it's not. His powers are real. Is he an alien, then? A genetic mutant? 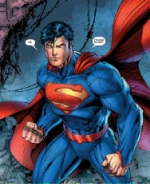 Why is he doing what he's doing? Where does he come from?

Make no mistake. Everything that exists, including the so-called Man of Steel, can be understood, and if it can be understood, it can be manipulated. Some may think me cruel to want to manipulate him but it must be considered: While we may not understand him, he most certainly understands us. And that means he can manipulate us. An alien, living in our midst for decades, watching and learning, and now suddenly he appears to us in just the right way to earn our worship? And somehow people think we're not being manipulated?

No. Trust must be earned. We can't give our worship quite so easily. Not until we understand him as fully and completely as he understands us. I've known, this whole time, that the threads were there. It was just a matter of finding them. Nothing truly defies the laws of physics, only our understanding of them. 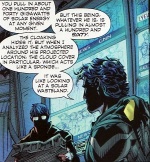 Thus far I've found possibilities but no solid leads. Until today. Because when you stumble onto an impossibility, like Superman absorbing 140 gigawatts (GW) from the sun, you know you've found the thread.

Because if the surface area of his body isn't big enough to absorb that much light, no matter how efficient an absorber he is, he simply must be sucking up solar power that would normally be hitting the ground around him. This makes sense with what Wayne says next; he calculated the location of another Superman (who is absorbing 160 GW) by mapping out the regions of the cloud cover which are lacking in solar radiation.

I did some quick calculations, and for Superman to be getting 140 gigawatts, he'd have to be absorbing all the light that would normally be hitting about 580,000,000 (Five-hundred eighty million) square meters. For comparison, that's about 5% of the area of the United States, or a little over three times the size of Kansas.

But that's not the whole story. Superman can't be absorbing all the solar radiation over that area, because that would include the light that our eyes can see. If he were, it'd be dark in Metropolis, and it isn't. Not noticeably darker at all. That means he must only be absorbing the parts of the spectrum coming from the sun which can't be seen, such as infrared and ultraviolet light. Those invisible wavelengths of light comprise about 56% of the light hitting any given square meter of the Earth. So if Superman were only absorbing the invisible wavelengths of light, he'd have to be taking solar energy from a little over a billion square meters. That's almost five times the size of Kansas, or about 10.2% of the size of the United States.

Ironically, I told him earlier about my plan to build a massive solar tower in Metropolis. Maybe ruining my tower is all part of his plan?

But that's absurd, of course. As it turns out, Superman absorbing this much power shouldn't be too much of a problem for solar panels. As I've said, Superman is mostly absorbing the non-visible light from the sun, and solar panels mostly absorb only visible light. There are, however, more efficient solar panels that do make use of other wavelengths. So, while Superman isn't much of a problem for now, he'll become more and more of a problem as time goes on, as wider-spectrum solar panels come into more common use. As I suspected. To say nothing of the damage he's likely doing to plants, of course. Flowering plants need infrared light in order to flower, for example.

There's very little probability that this is intentional on his part, of course, though I don't rule out the possibility. I find that when one is facing an opponent as ruthless as Superman, paranoia becomes a matter of sheer practicality. The so-called Man of Steel is capable of anything. I put nothing past him. That being said, more likely it's a natural biological process, one he has no control over.

The next thing to figure out is the mechanism by which Superman sucks up all that light. This really comes down to which forces can deflect a photon (a particle of light). There are really only four forces in the universe: gravity, electromagnetism, the strong nuclear force, and the weak nuclear force. Every force, every push or pull, every attraction or repulsion you've ever seen or felt comes from one of these forces. So which one is Superman using? Which ones can bend the path of light?

We know gravity can, but Superman can't be using gravity to draw the light to him. If he was, he'd be pulling everything else toward him as well. That's the problem with gravity. It doesn't distinguish. Whether you're a photon or a school bus, you're going to feel the pull of gravity.

Electromagnetism can't either, because photons are electrically neutral. They'll pass right through an electromagnetic (EM) field undaunted. So if Superman had some massive EM field around his body in order to pull light towards him, it just wouldn't work. Light would pass right through. On top of that, maintaining such a massive EM field would likely take up as much power as he absorbs from the sun in the first place.

The strong and the weak nuclear forces don't seem to really affect light at all, and also they work on such tiny scales that it doesn't make much sense to invoke them here. Superman couldn't be extending such a short-scale force to pull photons from miles away.

So what does that leave us with? Well, we know photons interact with atoms by getting absorbed, and adding their energy to the atom. The atom can later re-emit the photon, sometimes changing its wavelength in the process. We also know light is reflected off solid objects, because solid objects are made out of atoms. But I don't see how Superman could be using this to his advantage. It's not like he has a giant glass lens (made out of atoms) focusing light onto him. I should hope I would have noticed that.

...Unless of course he does. Maybe he has some sort of cloaked satellite in orbit, with a giant lens, constantly focusing light onto him. I'll have my own satellites look for signs of that, though I doubt it. The solution to this puzzle couldn't possibly be that simple. Still, if I'm to crack the puzzle, if I'm to beat him, I've got to account for every possibility.

I will find that evidence. Make no mistake. This thread is not a dead end. It is the beginning. I will follow it, I will uncover more threads, and I will unravel this tapestry if it takes a lifetime.

I have to. Because someone has to protect us from alien manipulations, and because no one else will.

Author's Notes: Batman's clue, the basis for Lex's analysis above, was given in Superman Unchained #2. The "Other Superman" mentioned is Wraith, who appears in that story. The solar tower Lex plans to build is also mentioned in the same story.

All the calculations Lex does in this story are my real calculations, so if there are any enterprising folks out there with a knowledge of physics, I encourage you to reproduce them and point out any and all mistakes in my math or my physics. Even the "Greatest Criminal Mastermind of Our Time" can make mistakes from time to time. Helping to flush out these errors helps him bring about the defeat of Superman and the rise of LexCorp. :-)