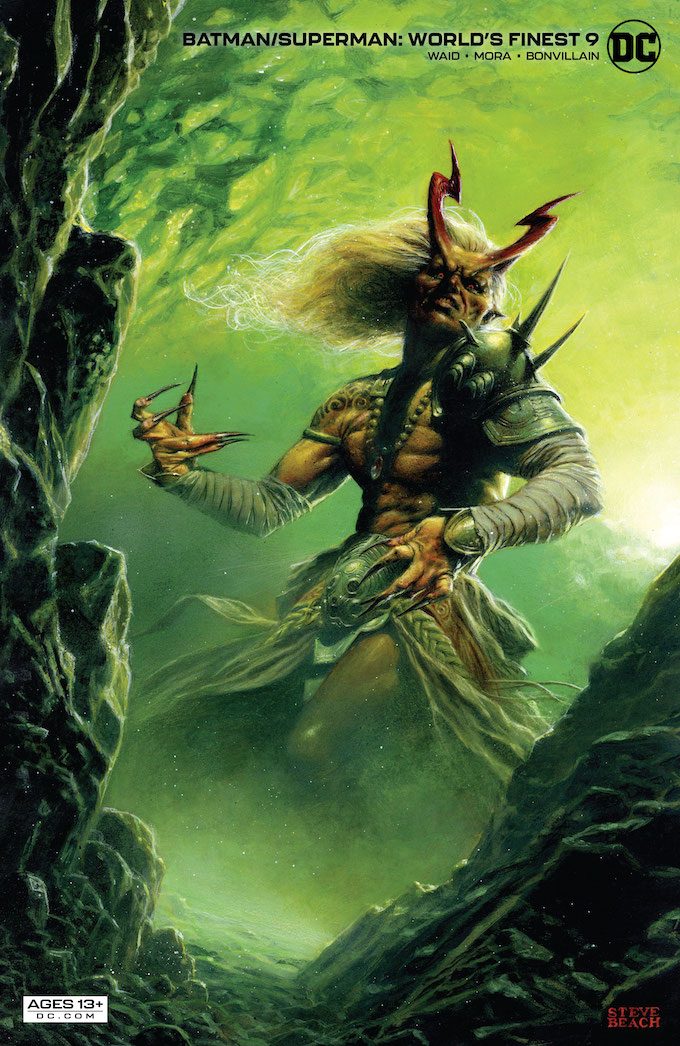 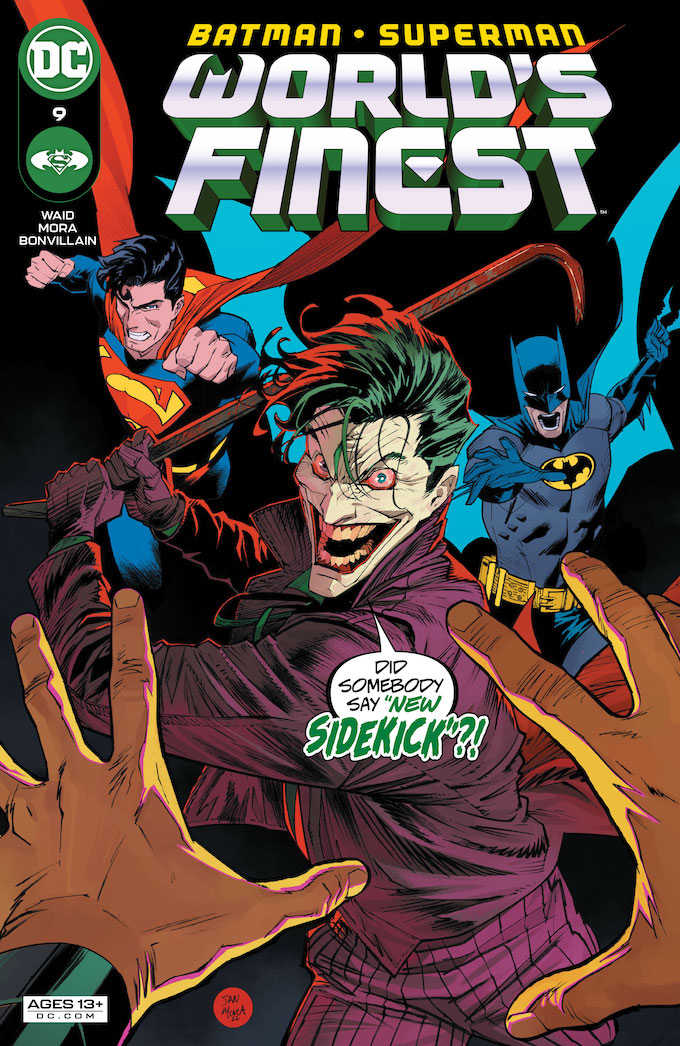 Reviewed by: Tony Parker
Click to enlarge
Deep in the sewers of Gotham City, Ratcatcher and a goon are bringing a diamond store clerk to be dinner for the former's rats, only for Batman and Boy Thunder to intervene. Boy Thunder zaps the goon who was firing a gun, while Batman fends of Ratcatcher's rats with sonics. Above ground, having saved the hostage, Batman attempts to teach Boy Thunder that he must know when to use logic over emotion. His rage at the crime and fear over the gun make things harder. In Metropolis he can be less cynical. Here, in Gotham, he needs to be prepared for the most twisted minds.

And speaking of twisted minds, Joker and Key achieve a success in their machinations, getting Angle Man's angler through killing him. They grin at the arrival of their next step.

Meanwhile, at the Gulf of Guinea, off the coast of Nigeria, Superman and Flash, racing on water to save drowning people, discuss sidekicks, Superman feeling like he could use some tips on handling one. Flash points out that he taught Supergirl, but Superman counters that David is a kid, like Kid Flash. Flash suggests that Superman not helicopter parent, and allow David to run and catch him if he stumbles. Otherwise, it's just a game to them.

The drowning people are still shouting in fear however, pointing at the pirates that caused their predicament. Superman isn't too worried though, as the Teen Titans (Robin, Kid Flash, Aqualad, Wonder Girl, Speedy) and Boy Thunder tackle the situation. Boy Thunder burns his target's fist, making Aqualad worriedly point out to him it's a bit much. Boy Thunder justifies it with there being oil on the ship, but Aqualad is still a little worried, while Speedy agrees. Robin and Wonder Girl are also worried, and they discuss David and his problems, agreeing to figure it out.

Suddenly, Aqualad is grazed by a hidden pirate, and Boy Thunder, furious, nearly kills the pirate with his thunder. Superman takes him away to talk privately in the skies, Robin's advice. Superman tells him they never punch down, ever. David apologizes for not being serious enough, but Superman tells him that wasn't the problem. They can use force to save people, but not to take lives. David pleads for Superman not to hate him, and Superman notices his doubled heart rate. He asks him what is he not telling them.

David finally confesses the truth: His parents had built a rocket months before the explosion, but he hadn't taken the threat seriously, thinking they were crazy. He goofed around in the rocket and lab, hiding things and pulling pranks, and one day, wrecked the rocket by accident. They had no time left to build another, and he was responsible for their death.

Superman tries to talk to David, but they have no time: The Key and Joker have opened a doorway to the bottom of the Gotham river, flooding the streets. Batman calls in, asking them to hurry. The world's finest, David and Robin save as many as they can, but it seems as if it's all a distraction. Superman manages to change the course of the mighty river to reverse the flood, while Batman uses the Batmobile to shut the door.

But it's not nearly over yet. People still need to be rescued, and to make matters worse, Joker shows up, having just Joker gassed David, who's laughing maniacally...

Story - 5: I'll admit, this was a bit of a stop and start issue. It almost feels like the first half was a little too slow, with Batman and Kid Thunder's battle with Ratcatcher taking some time (not helped by the amount of variant covers). However, as I kept on reading, I have to agree this was perfectly paced. Essentially, the story has David fail or worry all three of his current mentors (Batman, the Teen Titans, and Superman), showcasing jumpiness, emotional outbursts, and excessive violence. Revealing the truth we've been waiting for this whole time only adds to the story, the markings of a good twist reveal.

David had not taken the disaster on his planet seriously. It forms a lovely sort of connection to his mentors, a sort of combination of what Bruce was like before the murder and Clark's background. Adding David's desire to appease both of them and act like both of them, to be as happy as Superman is, but to never forget what could happen like Batman, creates an intriguing dichotomy, showcasing what could have been seen as character inconsistencies to be truly logical details. Of course David would appreciate the praise he got instead of just scowling around depressed, and of course he'd love his powers but still seem so fearful of using them and of course he'd be worried to hurt others but punish those who hurt others. David is trying to be better to save everyone but himself, since he doesn't think he deserves to be a last son.

Batman and Superman's mentorship scenes were expertly made too. The creep factor of Ratcatcher alongside Batman's detached but not heartless teaching offered some important lessons of balance to David, while Superman's incredibly endearing attempts to learn how to be a good mentor (such a rare example in comics, truly kudos to Mark Waid for this) and concerned dad scolding of David's outburst added a wonderful dimension to Clark, who so often gets left behind in crossover stories like this.

The action was good, the titans all got moments to shine in, really liked Robin's attempts to help David, being the experienced sidekick. Really my only slight gripe was with Joker and Key, who aren't really hitting it out of the park quite yet for me. Maybe because they only started playing a role now. I did like the final page, but could have been a bit better.

Regardless, a near perfect issue for me. This book just keeps getting better and better, and on our second main arc, it's delivering some great character pieces. Maybe not the most iconic book, but for me, this is one of the sleeper hits of 2022, and hopefully DC allows it to continue.

Art - 5: What more can I say, really, what more can I say about Dan Mora? Every month I come on here to tell you he is delivering excellence, with incredible set pieces, showcases of superpowers, and some of the best facial expressions in the business. Superman hasn't been this wonderfully designed since Smashes the Klan and For All Seasons, every scene carries a different but effective color pattern, and the lighting makes it all feel almost cozy without abandoning fear, action, and drama. A thousand adulations.

Cover Art - 3: It's not bad by any means, no. But it's a tad misleading, and you know how I get about those. Yes, Joker factors into this issue, yes the crowbar reference is nearly compulsory, and it even carries a nice Bronze age feel, but it's not amazing. Batman for once doesn't look that great under Mora's pen, Superman looks a lil off too, and Kid Thunder being placed the way he is sort of removes his agency, as if he is not as important in this story as the title characters. Also, he has thunder powers. Just zap Joker.

Variant Cover Art - 3: A pretty cool, heavy metal album esque rendition of the Devil Nezha. A little late for that, but not bad, not bad.

Variant Cover Art - 3: Yet another classic Superman and Batman cover, showcasing some probably referenced designs. It's a little bland, but I really really like Superman's design with the sun, so points for that.

Variant Cover Art - 3: Again, nothing that special, but Superman lifting a house or building and Batman saving the one underneath it is neat.